A LoyaltyLobby reader dropped me an email about promo posting issue he was having with Etihad Airways. I wrote about my own quest of getting Guest miles properly credited that took six months (read more here). 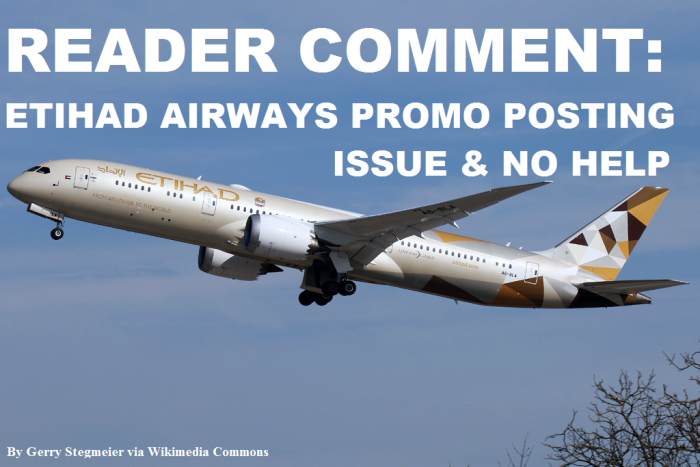 Etihad is refusing to credit me bonus miles by telling me that under multiple registrations for a promotion, they will not honor the promotion I’ve qualified for. It’s really frustrating how their marketing team is cheating customers by finding loopholes in their conditions to not give the bonus miles.

Here’s the email from Etihad Guest:

Having checked or record, we noticed that you have registered for the below 2 promotions.

First was on 14OCT2015 wherein you registered for the October bonus miles promotion that offered double miles in Economy and triple miles in Business or First class for travel between 15th Oct 15 until 31st Mar 16.

As blackout dates was applicable for this promotion for travel between 15th Dec 15 and 15th Jan 16. The below flights were taken during the blackout period and hence, do not qualify to earn bonus miles as per this promotion.

Furthermore, you registered for Year End bonus offering double miles in Economy and triple miles in Business or First class for travel between 22nd Dec and 30th June 2016 on 07JAN2016.

We would like to inform you that as mentioned on the promotional email, any promotions sent to the guest is not in conjunction with any other promotion and if the guest has registered for multiple promotions, the first registered promotion will be considered.

As per the first registered promotion, the above flights do not qualify for promotional miles as black out date applicable.

We sincerely apologize for the disappointment caused to you with this.

There really is an issue with promo miles posting from the various offers that Etihad Guest runs of which some are overlapping. Often miles just won’t post when they should. Sometimes the promo terms and conditions are misleading or missing important information such as valid ticketing dates.

I had similar issue last year where it took numerous emails and escalating to the CEO’s office (read more here how to get issues with Etihad resolved) before anything happened.

You can get this issue resolved but you probably have to escalate the issue to the CEO’s office using the email address that I have on that piece linked above.