An Air France Passenger en route to Paris was caught during the flight while smuggling her baby in a carry on bag all the way from Istanbul, obviously without a ticket for the infant. 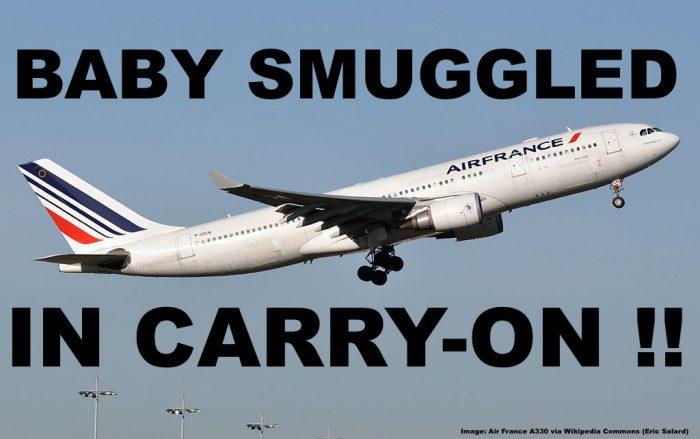 The woman managed to go through all security checks undetected (says a lot about the safety standard at IST) but a fellow passenger noticed the duffle bag moving and alerted the cabin crew.

I’m not sure what element of this story is more shocking, that a mother would smuggle her baby in a carry on bag or that the airport security failed in such a way that such a thing is even possible.

A passenger sitting near the rear of Air France’s flight 1891 from Istanbul to Paris alerted a flight attendant after he saw his neighbor’s bag moving. Upon opening the bag, the flight attendant was shocked to find an infant.

Fortunately, the baby was reported as being okay after spending more than half of the route in a cloth bag. After discovery, the cabin crew escorted the woman and the child to the front of the plane where they sat for the remainder of the flight.

Questions still remain as to why the woman felt the need to keep the child in her bag, and a spokesperson for Air France has thus far said little more than employees discovered “a child hidden in a bag without a valid transport ticket.” French authorities were requested upon landing and investigators are still looking into the incident.

I wonder if the crew would really register if a passenger has an infant on her lap or not regardless if there is a valid ticket for the child or not. Either way the main objective must have been to get the baby secretly out of Turkey for whatever reason, otherwise someone wouldn’t go through all the hassle just to save a little bit of money. For sure the French authorities will follow up on the matter.

Apart from being relieved that the child is well I think this just shines light on the low standards of some airports when it comes to security and check mechanisms in certain countries. If someone is able to smuggle a human being in a carry you can’t help but wonder what else you’re able to bring through that checkpoint. I always found Istanbul airport security to be very lax, similar to Athens and a few more.