The Spirit Airlines flight 141 from Baltimore to Los Angeles yesterday morning must have been an entertaining one. 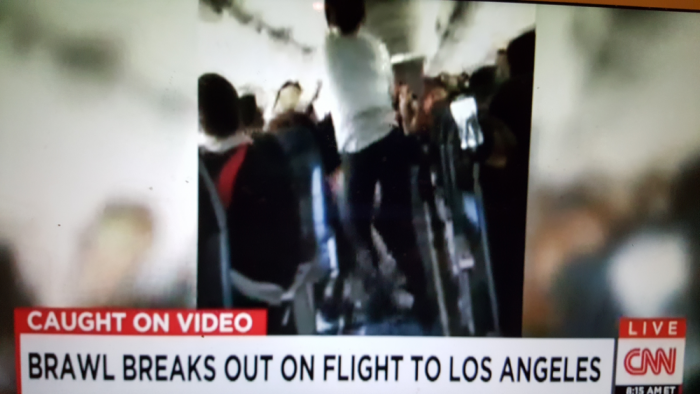 A fight had broken between intoxicated passengers that had been blasting music from their boombox (don’t think that there is in-flight entertainment on Spirit flights) and those that would have preferred quieter environment. This was all caught on camera.

Here’s an excerpt from LA Times (access the piece here):

Spirit Airlines spokesman Paul Berry said several other customers asked the women to turn down the music, but the women refused. Instead, the women posed a challenging question: “What are you going to do?”

“Then to provoke the other customer they were holding up their boom box in the air, waving it around,” Berry said.

That’s when a second group of passengers approached the two women and a fight started, he said.

LAX police were notified and met the crew when it landed, Officer Rob Pedregon said. The five women involved in what he called the “mutual combat situation” were pulled off the plane, he said.

I have never flown Spirit Airlines that is one of those airlines that keep their headline prices very low but then charges for everything including completing the purchase on their website (cheaper to buy from them at the airport).

It was very mean spirited for those intoxicated passengers to force others to listen their choice of music. Better to use headphones!