The Economist run a story this past week about the pilot shortage issue that is facing the US airlines. 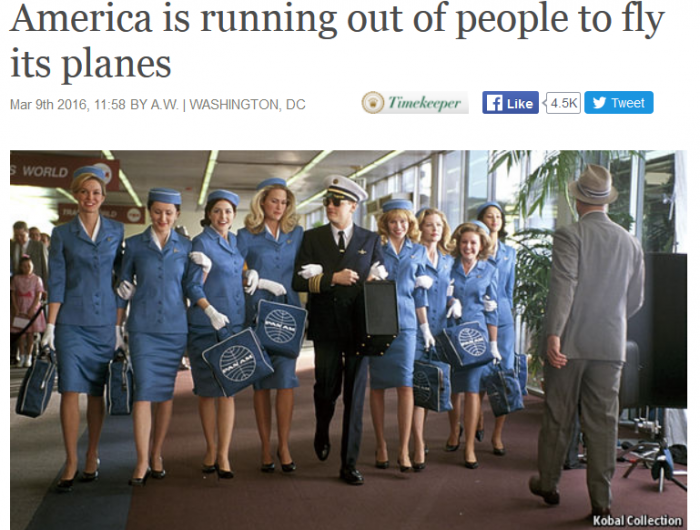 The congress recently changed rules requiring pilot working for commercial airlines to have minimum of 1,500 flight hours instead of 250 that was the minimum previously.

You can access The Economist article here of which below is an excerpt:

A low-salary, high-barrier-to-entry job is hardly an attractive prospect for people thinking about starting a career in aviation—and with regionals operating nearly half the country’s flights, some flyers’ working lives begin and end at these lowly carriers. For many young pilots, signing up for a foreign airline can mean a higher salary and lower requirements.

For now, the effects are mostly being felt on routes involving smaller planes and airports. But with the pipeline to the top pilot jobs shrinking, it is likely the major carriers will start to feel the effects. According to one analysis, in the next 20 years the supply of people to fly America’s planes will meet just two-thirds of the demand. That could force the big operators to slash routes.

The pilots flying for airlines such as American, Delta and United usually start with one of the “express” carriers that pay very little but “promises” a career path.

Many qualified pilots may choose to work with better paying airlines in the Middle East instead of doing turn and burn short haul flights.