When friend of mine was checking out from the Hyatt Regency hotel in Phuket this afternoon and paying using his Canada issued credit card, the terminal spat out the usual offer to pay in the currency of the card issued instead of Thai baht. 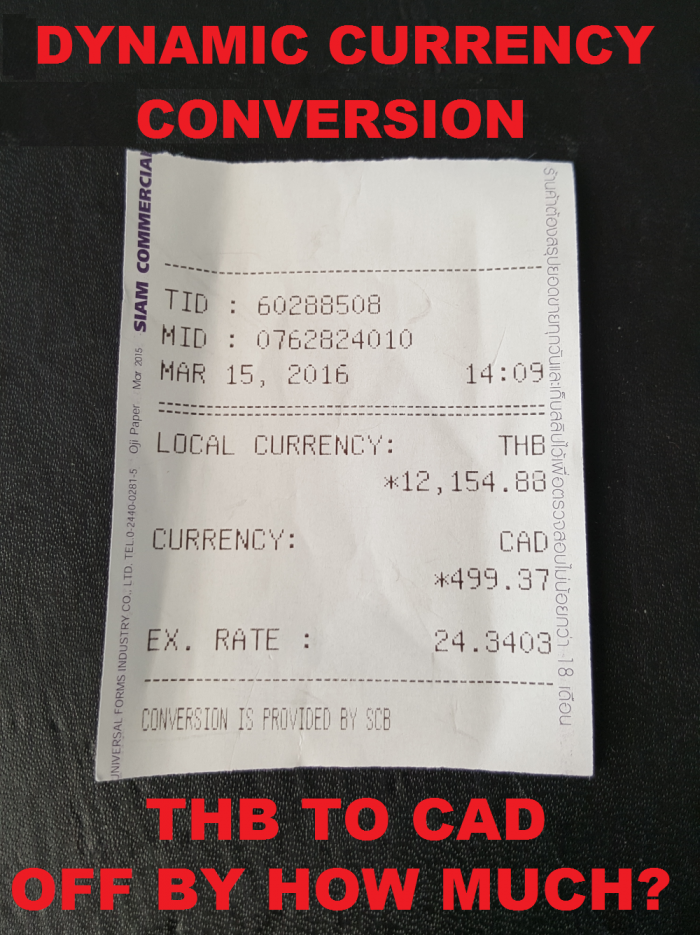 I have said it many times and will probably keep repeating this all over, but I have never seen an instance where this Dynamic Currency Conversion (DCC) would have been beneficial for the person paying the bill. It is very beneficial for the merchant whose payment card processor will usually split the “spread”.

Usually the DCC conversion is off by 3% to 5% and in some countries the commission is printed on the actual receipt. This is not, however, the case in Thailand.

It is easy to make a mistake of agreeing to pay in the currency of your card instead of the country when asked. Even I have to had to correct myself few times over the years.

So, how much the THB to CAD conversion offered by SBC (Siam Commercial Bank) was off? The actual charge would have been 460 CAD and not 499 CAD. The bank would have profited 8.5% and shared this with the merchant.

My friend obviously declined this opportunity to pay 40 CAD more.

I don’t usually get to observe these DCC slips in Thailand because I have bank account in the country and pay using locally issued THB card.

Beware: Fake Emirates (And Other Airlines) Facebook Pages Are Back !!