A bomb threat against an Air India flight en route from Delhi to Bangkok resulted in the aircraft being evacuated immediately after landing in Thailand and 42 passengers being injured in the process. 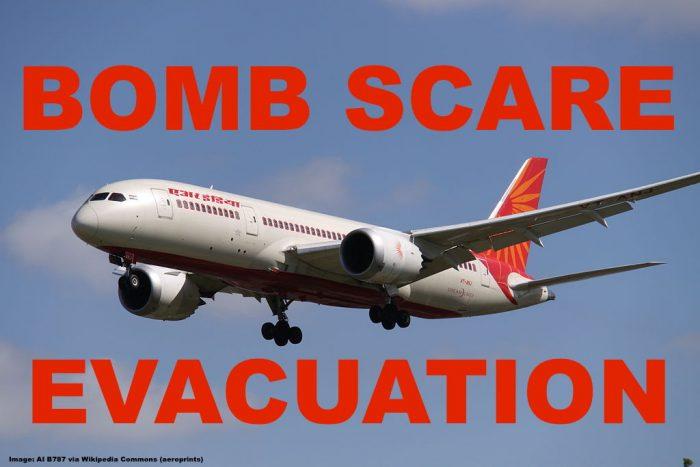 The passengers and crew were evacuated over the emergency slides after the aircraft was directed to a remote position by airport authorities.
One of the hardest decisions a pilot has to make is to decide about an emergency evacuation, especially if it’s in a situation that poses no immediate but only potential danger. Whenever passengers have to be evacuated over the slides there will be injuries, sometimes panic and this case proves it once again that a good amount of passengers can end up with a variety of injuries while ‘going down’ the chute.

The Asian Correspondent (access here) had a story about it this morning.

A BOMB scare caused the evacuation and search of an Air India flight at Bangkok’s Suvarnabhumi International Airport yesterday evening.

According to Air India’s Thailand manager Indranil Banerjee, an anonymous call received in India by the national carrier’s head warned of a explosive device on the plane, which was making its way from New Delhi to Bangkok.

Upon its arrival in Bangkok, authorities ordered Air India Flight 332 to park at an isolated spot on the tarmac as per standard safety procedures. Then all 239 passengers and 10 crew members were evacuated using the plane’s inflatable slides, said Banerjee.

Subsequently, bomb squad personnel combed the aircraft and went through all passenger baggage, but ultimately turned up with nothing. …

AOT, the company which manages Thailand’s six international airports, noted the evacuation of passengers via the plane’s slides, stating that 42 suffered minor injuries and was treated at the airport. Additionally, a passenger was sent to the hospital over chest pains related to a heart condition.

Air India has a history of incidents that could be traced back to terrorist attacks, the most prominent one being the 1985 bombing of Air India flight 182 killing more than 300 passengers and crew. Since then Air India introduced a stringent security net around all their flights. I found security at the airport in Mumbai (even as a transit passenger) to be one of the most invasive I ever experienced.

With their history and considering the world we live in today I can understand why Air India didn’t take any chances once a bomb threat was placed through the phone call and the Captain decided to get the passengers and crew off the plane as soon as possible. Hopefully all passengers recover quickly from this incident.