When I was reading the International New York Times at the airport lounge this morning, I came across this good article about the teething issues surrounding the launch of the Eurowings. 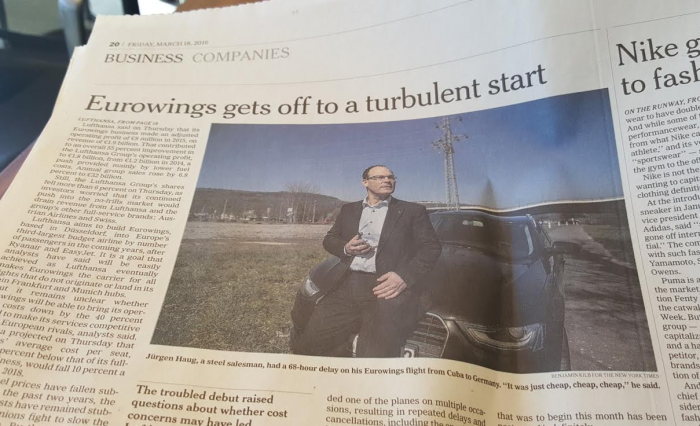 Eurowings is a low coast airline within the Lufthansa group and handles all short-haul flights that are not touching Munich or Frankfurt. The airline also started long-haul operations recently with two leased planes that have caused the recent issues.

You can access the New York Times article here of which below is a excerpt:

“It was an end-to-end disaster,” Mr. Haug, 53, said of the two-week trip to Varadero, on Cuba’s northern coast. The trip was also delayed by a full day at the beginning, when Eurowings canceled his outbound flight to Cuba from Cologne.

A decision to serve eight far-flung destinations with just two leased Airbus A330 aircraft quickly proved unwieldy, for example. Technical problems grounded one of the planes on multiple occasions, resulting in repeated delays and cancellations, including the one that left Mr. Haug stranded in Cuba for three days. Under European passenger-rights rules, affected travelers were eligible for compensation of up to €600 each.

But Mr. Haug said he was uncertain whether he would fly again with Eurowings after the Cuba fiasco. He said he was holding onto the €250 flight voucher that he and other passengers received, together with an apology, from the airline.

You should always think twice booking a flight that operates once or twice a week. If the airlines decides to cancel one of the frequencies, you may be stranded for days.

Eurowings’ responsibility would have been to rebook the affected passengers on other airlines to their final destinations and provide care and compensation.

Lufthansa first used the Germanwings brand and then decided to make it less German and started to use Eurowings instead. The airline is trying to reduce the costs involved with short-haul flights by farming them out to wholly owned subsidiary.

The long-haul flights are actually operated by SunExpress Deutschland, a joint venture between Lufthansa and Turkish Airlines, on behalf of Eurowings. What could go wrong?