A Lufthansa jet approaching Los Angeles International Airport (LAX) reported a near collision with a drone last Friday which the pilots spotted in the very last moment. 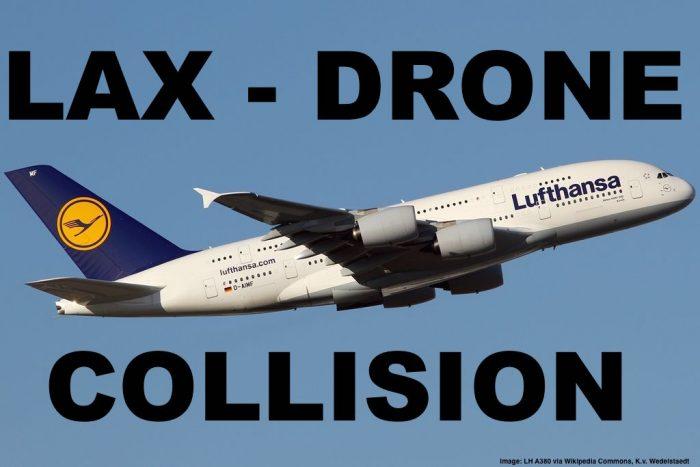 The remote controlled drone was flying about 200 feet above the jet which was on 5000 feet during it’s approach towards LAX.

People really seem to have a hard time grasping not to play around with their drones around airports or in the Terminal Control Area (TCA) to begin with.

Just last month we wrote about a drone spotted by an American Airlines flight upon landing in Miami (access our article here) and now yet another incident in Los Angeles.

The LA Times has a story about it in todays paper and online edition (see here).

The pilot of a commercial jetliner said his plane nearly collided with a drone while approaching Los Angeles International Airport on Friday afternoon, sparking a search by L.A. police and sheriff’s officials for the owner of the unmanned aircraft.

The near-miss was reported before 2 p.m. about 14 miles east of the airport at an elevation of 5,000 feet and involved a Lufthansa Airbus A380, said Los Angeles police Lt. Robert Binder. The drone flew 200 feet over the aircraft, the Federal Aviation Administration said.

L.A. County Sheriff’s Department and police helicopters were headed to the area to try and locate the drone pilot, Binder said, adding that it would be a long-shot search.

As drones have become more prevalent, so have their run-ins with aircraft. Over the last few years, drones have grounded firefighting aircraft in California by flying too close during firefighting missions and have smacked into buildings and taken down power lines.

In November, a Los Angeles man was forced to hand his drone over and promise not to fly one for another three years after interfering with a police search.

Pilots across the country are logging a fast-rising number of near-misses with drones, with 1 out of 5 of those risky incidents happening in California…

Currently, hobbyists flying drones have few federal legal restrictions, although they are warned not to fly within five miles of airports or above 400 feet. Drone operators can be fined if they endanger people or other aircraft, the FAA says.

“This is one more incident that could have brought down an airliner, and it’s completely unacceptable. A near-miss of 200 feet should serve as a stark reminder of the dangers posed by reckless drone use,” Sen. Dianne Feinstein said in a statement.

I wonder what will happen if a drone actually downs an aircraft. I’m pretty sure a fine won’t cut it in such a case.

The other thing that surprised me is that 5200 feet are 1.6 km. I would never expect that a amateur drone can fly that high or could be remote controlled like that. That’s crazy!

I can just repeat what I said last time. People should be responsible with their toys and even though I’m sure flying drones and taking videos with it is a hobby one can be very passionate about one has to consider the dangers the device can pose.