A series of two bomb blasts at the check-in area in the Brussels International Airport terminal building this morning left several people dead and many injured. The airport has been closed for the time being. 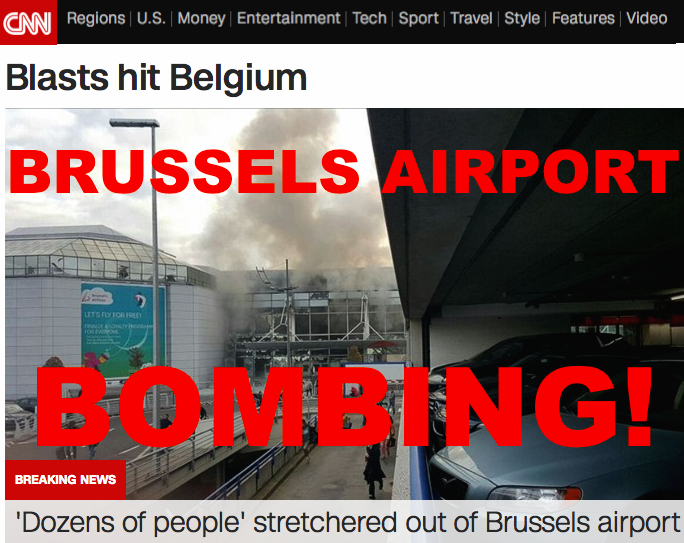 In the meanwhile a third blast has been reported from a Metro Station in the city, Metro service has been suspended as well.

The Belgian authorities are trying to get an overview of a series of bomb blasts that rocked Brussels this morning, two of which occurred in the departure hall of Zaventem Airport and another one at the Maalbeek metro station.

Several people have been reportedly killed by the attack and many more injured. The victims were sighted to be transported off on stretchers and are on the way to hospitals. Airport and Metro operations have ceased in the meanwhile, bringing the transportation options in the European capital to near standstill.

Two explosions occurred at the airport in Brussels, Belgium on Tuesday.

Federal police at the airport at Zaventem told CNN that “there has been an explosion” and “something has happened.”

Dozens of people have been taken on stretchers out of the airport, according to eyewitnesses.

The Brussels airport tweeted that there have been two blasts and said that “the building” is being evacuated. They also said all airport operations have been suspended and asked those nearby to remain calm.

The Belgian government has confirmed casualties but has given no numbers. The cause of the explosions is unknown. Another explosion has now been reported at the Maelbeek metro station close to the EU institutions. The whole metro system has been closed.

The blasts come four days after the capture in Brussels of Salah Abdeslam, the main suspect in the jihadist attacks in Paris on 13 November 2015.

Belgium has now raised its terror threat to its highest level.

Emergency services are clearing the airport completely. Belgium’s Het Laatste Nieuws reports that more bombs have been found. The airport is being evacuated and has been closed to flights.

The Belga news agency reports that shots were fired and shouts in Arabic were heard before the two explosions.

The information reaching the public from a variety of sources should be taken with reservations at first until they can be confirmed throughout the day and the days thereafter by officials investigating the case.

It appears however that the islamic terror has once again arrived in continental Europe and authorities are on high alert to monitor the situation and ensure safety as much as possible.

Following the incident in Brussels Airport today we would like to confirm that Eurostar services are running normally. We advise customers to allow extra time for check-in as security checks may take longer. Please be aware that public transport in Brussels may be disrupted.

I wouldn’t count on it that it stays this way though considering the situation at the metro stations. Keep checking if you have a ticket for the Euroostar or plan on using it as an alternative to get out of Brussels.

If you are in Brussels at the moment or scheduled to travel there, either by train or flight the best bet right now is to stay put, possibly indoors and keep monitoring the media.

It’s a sad day that once again people have to die for nothing. The chaos which is gripping Brussels and for sure other European cities today will have consequences for security precautions at airports in the weeks and months to come. Security will be tight all around, let’s see what additional measure the authorities will come up with. In the meanwhile lets give our thoughts to the victims and their families, may they rest in peace!