The World Travel & Tourism Council released its report about the travel in 2015 that includes some interesting info that both CNN & Financial Times covered yesterday. 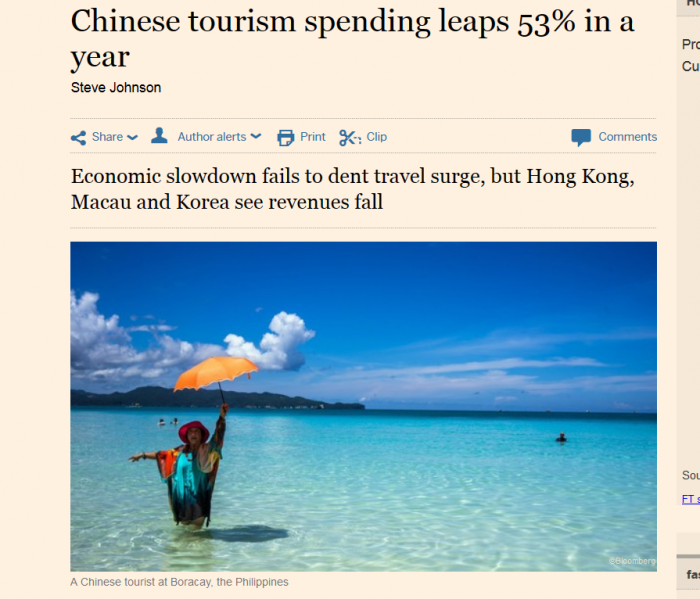 Chinese tourists have really taken over (if someone hasn’t noticed it). They now represent 10% of all the tourists and spent $215B outside of mainland China last year.

Here’s an excerpt from Financial Times (access the article here):

Chinese tourists spent $215bn outside mainland China in 2015, according to figures released on Monday by the World Travel & Tourism Council, a 53 per cent rise from the $140bn spent in 2014.

In order to attract more foreign tourists, Mr Scowsill agues that China needs to copy the US by creating a visa waiver programme, introducing an electronic visa processing system and launching a China-wide marketing fund, rather than leaving marketing in the hands of each individual province.

The WTTC reported “severe declines” in tourism revenues in 2015 in Macau (down 32 per cent), South Korea (down 10.2 per cent) and Hong Kong (off by 8.4 per cent), each of which are highly reliant on visitors from mainland China. Taiwan only did marginally better, eking out growth of 1.5 per cent in real terms.

The influx of Chinese tourists shouldn’t have come as a surprise to anyone who actually stays at hotels. There are Chinese tourists everywhere and many hotels have special F&B menus catering for this group of clientele.

The Chinese tourists are spending some serious money and many choose their destination based on how good the shopping is there.

The decline of Chinese tourists from mainland to Macau and Hong Kong is not a surprise either. China is clamping down on corruption and the money flow to gambling in Macau has thus decreased.