For the first time after maybe six years I had to fly United Airlines Global First again last week, simply due to scheduling and I was absolutely shocked by what was offered on the Hong Kong-Singapore route.

I had a connection arriving on Thai First Class and connecting to United Global First was a shock like someone throwing you into a cold pool after coming out of a sauna.

Due to a last minute trip I booked through United MP (I’ll write it up in Award Success soon) I flew the route Bangkok-Hong Kong-Singapore-Auckland this weekend, taking advantage of the long transits in Hong Kong and Singapore to get some things done in between.

I had about 20 minutes at the United First Class Lounge in Hong Kong which I prefer to the Thai Airways one because it’s more private. 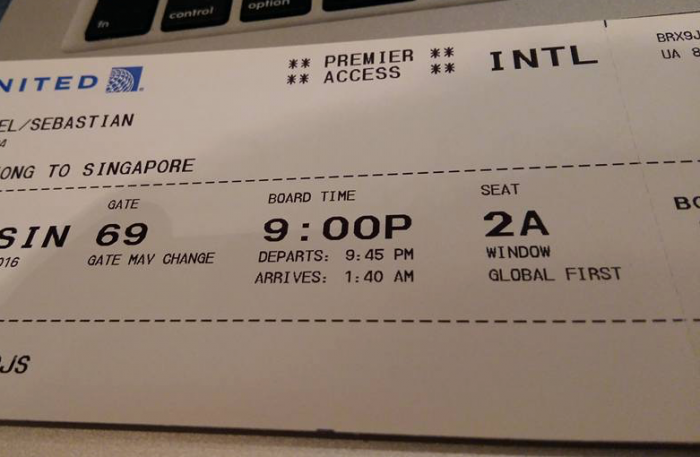 Boarding was on time but let me say one thing, I’m really sick of this nonsense that you can’t take any beverages on board U.S. carriers even if obtained in the transit area. I took two bottles of Perrier from the UA Lounge because I already knew that United serves only rubbish on board, even in First Class. Sure enough another security check at the gate in Hong Kong, even for intra Asia flights.

The real drama began on board though.

Here are the amenities and my pre-departure beverage in a lovely plastic cup! 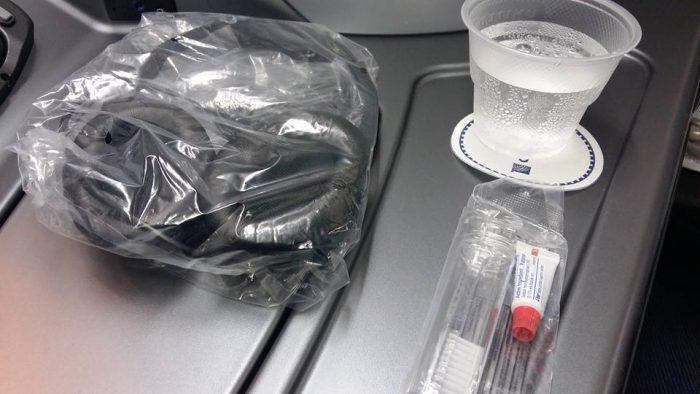 The cheapest headphones, amenities from a basket (no amenity kit) and sorry, a plastic cup in international First Class?

Who thinks that United would separate cabins between First and Business Class for privacy and noise reduction is mistaken as well. They don’t even have curtains installed.

The Business Cabin was illuminated during most of the flight which made proper rest in First close to impossible as well.

What was for dinner? Well, there was no menu (yes, no printed menu in Global First!) so the flight attendant came around with a pathetic list of which only 2 options were available. The exact same as Business Class, nothing else.

Option three was the only thing available, either Salmon or an Asian pork dish. I love Salmon but not short before going to sleep due to the aftertaste. I was actually hoping for a solid Beef Filet which should be too much to expect in First Class on a 4 hour flight right?

In the end I requested some pasta from Economy Class which was delivered on a plate. Luxury at last.

Immediately after eating some of it I went to sleep before I got even more pissed about the whole thing.

These are the three items that were missing completely from the flight.

There is additional information about the meal options here. It says

Well, none of this really materialized either.

A while back a friend of mine had another experience where United ran out of printed menus and presented him with a set of stapled photocopies.

I wasn’t expecting to encounter anything even close to the Thai Airways product on which I arrived in Hong Kong where they serve Dom Perignon champagne and Lobster Thermidor even on a two hour flight but what United Airlines features was pathetic and disgusting. I would have never imagined it to be THIS bad to be honest. Stay away from this product if you can help it!