Brussels International Airport re-opened yesterday after shutting down operations since the March 22 terror attacks that left 16 people dead and many more injured. 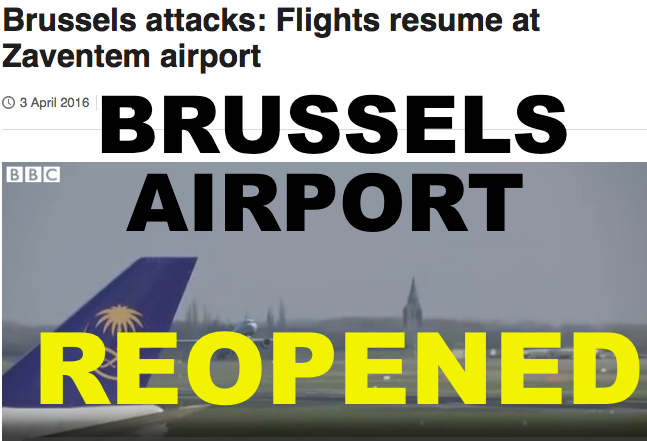 Three flights left Brussels on Sunday to European destinations through temporary departure areas that have been installed by airport authorities.

The new departure areas are strictly controlled allowing only passengers in in addition to tight security measures around the airport itself restricting and recording cars that enter the area.

You can read more about the airport re-opening on BBC Online (access here).

Three Brussels Airlines flights departed for Faro in Portugal, Turin in northern Italy and Athens. Passengers were screened on an approach road and again before check in.

Attacks on the airport and a Brussels metro station by so-called Islamic State on 22 March left 32 people dead. …

Airport chief executive Arnaud Feist said: “These flights are the first hopeful sign from an airport that is standing up straight after a cowardly attack.”

Brussels Airlines has estimated the closure of its hub has been costing it €5m ($5.7m) a day.

The stringent new security checks were put in place after police threatened to go on strike if measures were not improved.

Passengers were asked to arrive three hours before their flight departure time. They were only able to get to the airport by car or taxi – the terminal is still closed to trains and buses. …

Late on Friday, Belgian officials reached a deal with police unions on enhanced security at the airport.

Mr Feist said he hoped the airport would get back up to full capacity in time for the start of the summer holidays at the end of June.

I really don’t understand what there is to ‘deal’ and make a big booha about. As horrible as these attacks were it’s done and over now. There is no need for any higher security level than other airports in Europe.

Anyone traveling in and out of BRU should consult this website before to familiarize themselves with the current situation.

It will likely take a long long time until regular airport operations as we know it will resume so if one can avoid it the best option would be to consider train travel in and out of Brussels at least for nearby countries such as Germany, France, the Netherlands and the UK.

Obviously there are destinations that can’t be reach directly per train but the Brussels area is well connected to Duesseldorf (Germany) where plenty of international flights depart as well. I think using DUS is a much better option right now until operation in Brussels are back up to speed without all the outlined inconveniences.