This week Whine Wednesday is about a real exception within all the Hotel Rewards Programs, namely that Hyatt Gold Passport does not count award stays paid fully with points as qualifying.

Some time ago already Hyatt introduced Cash&Points awards which are elite status qualifying, however awards fully paid with points are not.

The problem with this is that Cash&Points awards are not available in the same way that regular Gold Passport awards are. Usually as long as there is a Standard Room available you can book it with the designated amount of points depending on the category of the hotel.

The reason for this discrepancy is that the reimbursement for the hotel is handled differently. While the property gets compensated very well (up to their budgeted ADR) for points only award stays if the occupancy is 95% or higher, they do not get anything extra for Cash&Points awards.

Some time ago LoyaltyLobby obtained the following reimbursement schedule through some document that was publicly available on the internet (has since been taken down). 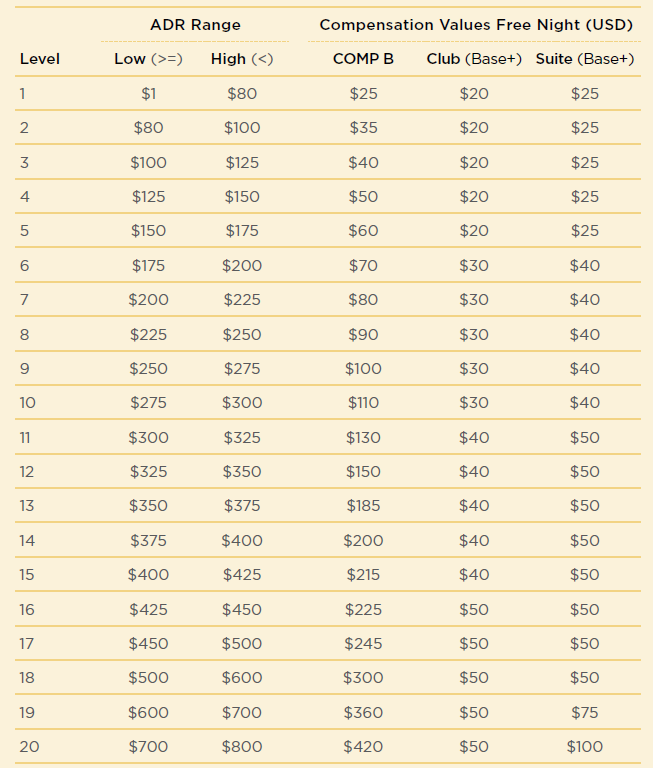 As long as the hotels occupancy rate is lower than 95%, they get reimbursed by their budgeted ADR (Average Daily Rate) by the schedule above.

Note that it has nothing to do with the hotel award category assigned by the Hyatt Gold Passport, but rather the budgeted rate (these budgeted daily rates can often be more than the ones that actually materialize over the year).

This wouldn’t be a problem because Starwood SPG for example also has different availability for their Points / Cash&Points awards. The difference is that SPG counts all stays towards elite status qualification and Hyatt Gold Passport only the Cash&Points awards.

For next weekend I was looking into a redemption at the Grand Hyatt Tokyo where the daily rate right now is 48,000 JPY + Tax and the points redemption 25,000 GP points. The Cash&Points option is not available because the hotel obviously expects a high occupancy and tries to maximize the revenue. I don’t blame them for that, hotels are a business after all and not a charity.

I hate that Hyatt in an almost standalone fashion doesn’t award elite qualifying stays paid fully by points. Both Starwood and Hilton for example  do award a full stay credit for such bookings.

It’s time for Hyatt to finally step up to the plate and change this rule because it really doesn’t make much sense in light of the competition. Either that or make it more attractive for the hotels to offer Cash&Points.

I try to exclusively redeem cash & points awards up to Category 6 (Cat 7 with 300$ plus tax Co-Pay almost never makes sense) these days as it’s the most economic way to reduce your points balance and still collect qualifying stay credit.