The Economist’s 1843 Magazine has made an interesting graphic about international airlines and comparing the prices they charge to the service provided. 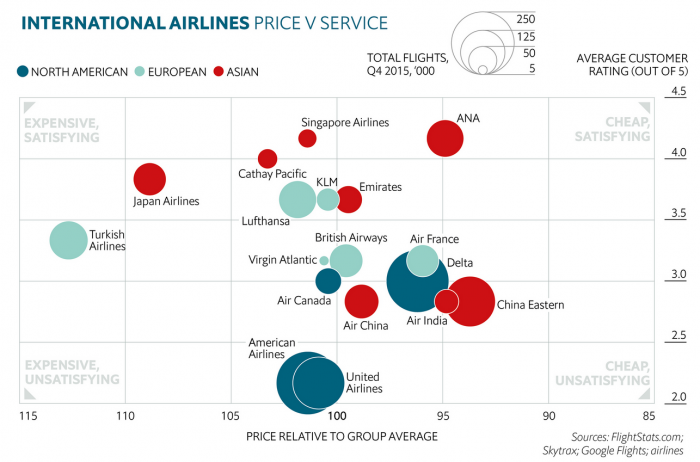 They have used Skytrax (not my favorite source for quality info) for the service and had run ticket price tests between 30 most popular airports in the world to come up with the cost.

Asia’s airlines are mostly excellent; Europe’s are competent; America’s are awful. It is a pattern that many seasoned globetrotters have observed, but which 1843 has confirmed by trawling through data on 18 major international carriers, visualised in the chart above.

We used flight-volume data from FlightStats.com and customer-satisfaction data from Skytrax, an airline consultancy which asks users to mark carriers out of five for the quality of their food, service, comfort, in-flight entertainment and value for money. American and United each scored 2.17 – barely half as much as leaders ANA and Singapore Airlines, both rated at 4.17.

The only thing that I would disagree with this study is that their data somehow identifies Turkish Airlines as expensive and ANA as cheap. Should be the other way around based on my empirical evidence (read thousands of airline fare searches over the years).

The graph also proves that the prices for most of the time are about the same (competitive market). All being equal, you should buy your tickets from airlines that actually provide you with service.