This week the Compensation Clinic makes a brief stop in Tokyo where I had one of the worst stays at an Intercontinental for quite some time from beginning to end. 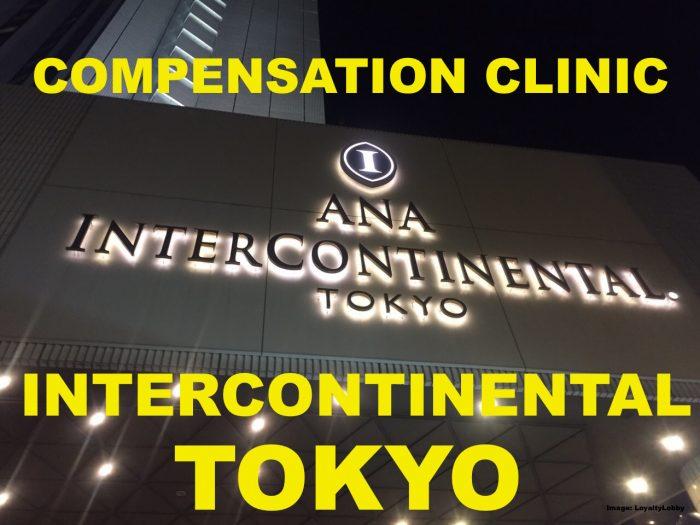 As soon as I posted about it on my personal Facebook I had two friends commenting they also had bad experiences there so at least I was assured it’s not just me this time.

Usually I tend to go by saying ‘How bad can a 5 star hotel really be?’ but after many disappointments over the years I should stop doing that and research a bit better before booking properties for the first time.

This Friday, Tokyo appeared to be very busy and my usual options of the Hyatt chain were all sold out. Since I planned to meet up with friends in the Roppongi area for dinner the same evening I decided to book the ANA Intercontinental Tokyo which is just down the street from Roppongi Hills.

I have been to the Grand Hyatt before but not to the IC so before booking I called up the hotel and inquired with the Concierge about transportation options. I was told to take the Limousine Bus from Haneda and that it would run until late. Fair enough!

Unfortunately after arriving from Taipei short before 6pm I was told there is no more bus to the entire area that day, the last one leaving at 2:15pm. Great job Concierge! Next time I call my butcher, it’s the same result. I ended up going to Shinjuku and then taking the Metro following by a hike down the road. What a pain in the rear!

Upon arrival I was given a room with 2 beds even though I specified to receive a King Bed. During the entire time of check-in it wasn’t mentioned what room type I’d be getting so I assumed it’s fine and as per the preferences.

After discovering the bed situation and already reaching 9pm I asked for the Hotel Manager to contact me and in the meantime I checked for other hotel options in the area. The Hyatt still being sold out and the reservations not answering the phone I finally managed to get a simple King Size Bed room. The hotel manager promised to call back next morning which never happened and that brought the barrel to the point of overflow.

I then had a chat with the Front Office Manager who was the first professional person I encountered in that entire hotel. It was agreed to that the night will be refunded and 50,000 points placed into my IHG Rewards account.

I seriously don’t know where the remainder of the staff employed at the IC ANA Tokyo (there are two – The IC Strings is supposedly better!) went to hospitality school but this property is a disgrace considering the service level as well as the condition of the furniture in the rooms.

I had another stay booked in the coming week but decided to cancel it for obvious reasons.

I don’t stay at Intercontinental Hotel all that regular and actually just started to pick up on my stays again after my trip to New Zealand. I don’t get how a concierge at a 5 Star hotel can’t get transportation information right and how things are possible to be mishandled in such a manner even by senior management. I believe the outcome is fair and I will continue to stick to Hyatt when in Tokyo.