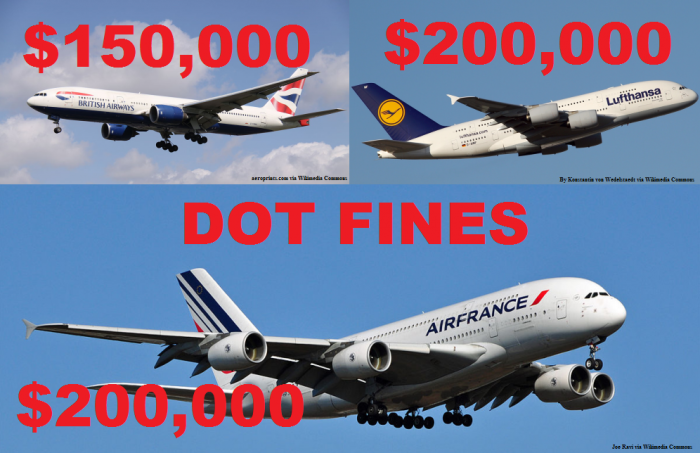 Here’s the press release from DOT:

WASHINGTON – The U.S. Department of Transportation (DOT) today fined Air France, Lufthansa, and British Airways for not adequately responding to complaints filed by passengers with disabilities. Air France and Lufthansa were each fined $200,000 and British Airways was fined $150,000. The airlines were also ordered to cease and desist from future similar violations.

“When air travelers file complaints with airlines, they deserve prompt and complete responses that appropriately answer their specific concerns,” said U.S. Transportation Secretary Anthony Foxx. “We will continue to take enforcement action when airlines violate our rules protecting the rights of passengers.”

The Air Carrier Access Act (ACAA) prohibits airlines from discriminating against individuals with disabilities.  Under DOT rules, airlines are required to provide a written dispositive response to a written complaint alleging a violation of the ACAA within 30 days of receipt of the complaint.

These consent orders are the results of several on-site regulatory compliance inspections conducted by the Department’s Office of Aviation Enforcement and Proceedings. During these inspections, the Department reviewed a number of disability-related complaint files and found that, in many occasions, Air France, Lufthansa, and British Airways failed to provide dispositive responses to passenger complaints.

The DOT really should add one or two zeroes to these fines that it assesses. $200,000 is less than what European based airline should pay in EC 261/2004 compensation to the passengers in cash when one long-haul flight is significantly delayed.

I guess that this is just a reminder to these foreign airlines that operate in the US that they need promptly reply to these complaints.