United Airlines is not known for its customer service. The airline tends to be the dead last on the DOT and various studies derived from the data when it comes to customer satisfaction and number of complaints.

Now, the airline tries to get Untied.com, a Canadian website, shutdown on a premise that posts email addresses and phone number for select United Airlines executives that are in charge of “customers”. The case is currently legislated in Montreal.

Here’s what the author of the website has posted when you enter it: 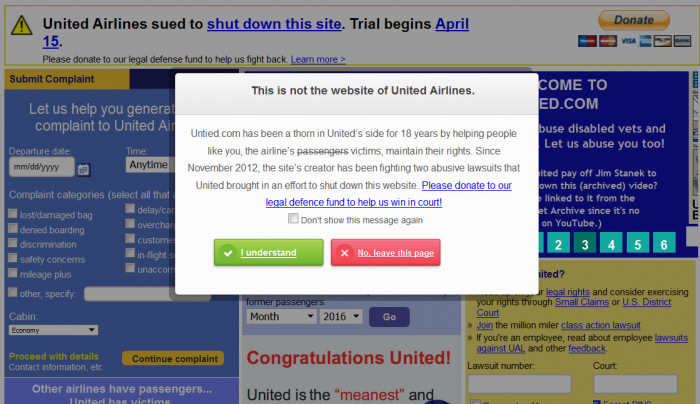 Here’s the contact information that United wants to be removed:

Here are some customer complaints from this month:

Financial Post run a story about this on Thursday of which below is an excerpt (access the full article here):

United Continental Holdings Inc. is suing Jeremy Cooperstock, an engineering professor at McGill, over his customer complaint website, Untied.com. The airline wants Cooperstock to delete contact information for its management and lawyers; he has refused.

His 2011 redesign of Untied.com caught the airline’s attention because of how similar the two sites looked, though Cooperstock has since added several disclaimers. He also posted the publicly available company contact information for vice-presidents and managing directors, warning passengers to avoid the customer complaint department.

The airline requested that Cooperstock remove the contact information in June 2012. He refused and, in November 2012, United Continental Holdings — along with several senior employees — sued the professor through the Quebec Superior Court.

Cooperstock says Untied.com was designed to be parody, not to confuse United customers. The sites no longer look alike since the airline redesigned its own homepage last year.

Cooperstock says he won’t back down after spending thousands of hours on the case and thousands of dollars on legal fees, though much of that has been covered by donations through his website.

No wonder why some many United Airlines customers are turning to filing complaints with the DOT rather than trying to work something out with United. The airline still is a huge mess.

Not sure how posting work email addresses and phone numbers of United Airlines executives that are in charge of “customers” could somehow be worthy of a lawsuit if it wouldn’t be for the customer complaints lodged on the website?