Yes they did it again! Just a day after it was reported that Southwest kicked a Muslim lady off one of their flights, another incident became public where they ejected a UC Berkeley grad student for talking in Arabic on his cellphone. 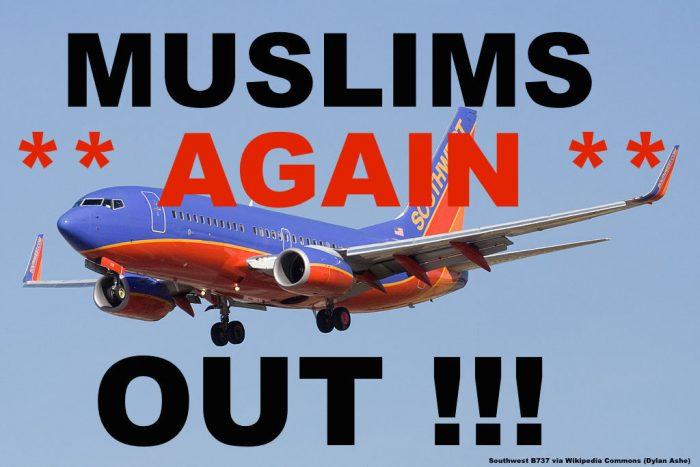 The 26 year old was on a flight from Los Angeles to Oakland when this incident occurred.

Yesterday we reported about the case where a woman was thrown out after requesting a seat change due to her religious belief (access here).

Now it was uncovered that earlier this month another incident involving Southwest saw a 26 year old Iraqi man who is a grad student at the University of California Berkeley.

A college student who came to the United States as an Iraqi refugee was removed from a Southwest Airlines flight in California earlier this month after another passenger became alarmed when she heard him speaking Arabic.

The student, Khairuldeen Makhzoomi, a senior at the University of California, Berkeley, was taken off a flight from Los Angeles International Airport to Oakland on April 6 after he called an uncle in Baghdad to tell him about an event he attended that included a speech by United Nations Secretary General Ban Ki-moon. “I was very excited about the event so I called my uncle to tell him about it,” he said. …

But the conversation seemed troubling to a nearby passenger, who told the crew she overheard him making “potentially threatening comments,” the airline said in a statement.

Mr. Makhzoomi, 26, knew something was wrong as soon as he finished his phone call and saw that a woman sitting in front of him had turned around in her seat to stare at him, he said. …

After this the man was confronted by an Arabic speaking employee of Southwest Airlines in the gate area.

“I said to him, ‘This is what Islamophobia got this country into,’ and that made him so angry. That is when he told me I could not go back on the plane.”

I start to wonder if a certain U.S. presidential candidate recently acquired Southwest Airlines because it appears the entire staff is out of control.

If you (as an airline) have so many incidents related to ethnic profiling I really wonder what their internal guidelines are for dealing with such a thing or if there even are any. Not sure what would be more uncomfortable though because from what it looks like their policy is to just get rid of the ‘nuisance muslim passenger’ and have the person questioned by the airport police. Disturbing to say the least!!