Today Whine Wednesday is about something that happens to innocent travelers every now and then: Scamming! One of the most notorious scam right now is the Bullet Scam at Manila International Airport. 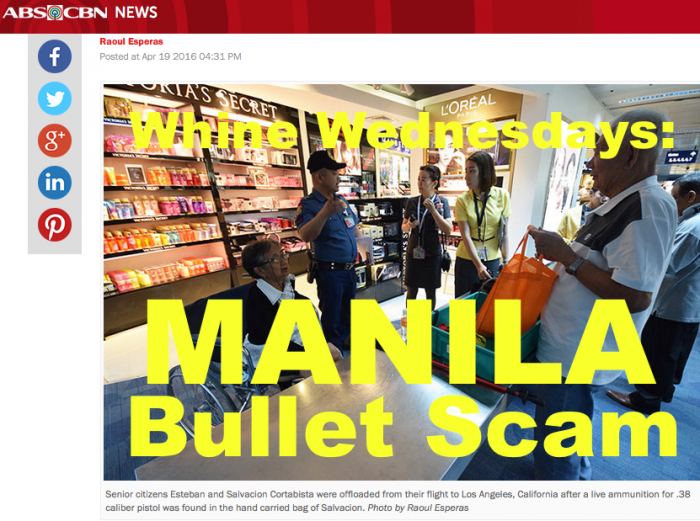 The process is that a piece of ammunition is planted into an innocent passengers carry on baggage around the security checkpoint who is then extorted for money and threatened with arrest.

This Bullet Scam or “Lag Lag Bala” as the locals call it has been going on for quite some time already and in fact John wrote about it the first time back in November when it started to make international headlines (access his article here).

It has now escalated to the point that even locals and senior citizens in wheelchairs are being extorted as it became public this week through a local ABS News article (see here).

Two senior citizens were barred from boarding their flight bound for Los Angeles, California after airport security personnel discovered a live bullet in their baggage.

Couple Esteban and Salvacion Cortabista, ages 78 and 74 respectively, were barred from boarding Korean Air flight KE 622 when personnel manning the X-ray scanner of Ninoy Aquino International Airport discovered a live ammunition for a .38 caliber pistol in the carry-on bag of Salvacion.

The couple was surprised to learn that a live ammunition was found in their baggage. They denied owning the ammunition.

Apparently there is a law in the Philippines that makes it a serious offense to keep/carry ammunition around and especially on airplanes. Nevertheless this is getting completely out of hand, the lady can’t even walk herself and sits in a wheelchair.

How would she get into possession of ammunition for a gun? It’s obvious that it was planted.

Esteban said he was surprised that they were able to get past the first X-ray scanner when they entered NAIA Terminal 1 but were later on blocked at the final scanning area.

As of writing, the couple was offloaded from their flight and their checked baggage were stored at the Korean Air’s office, pending the investigation and filing of appropriate charges by airport authorities.

The fact that this is still going on means that it’s tolerated or even encouraged by the local airport/police authorities who oversee these checkpoints. The Philippines, besides beautiful islands, are well known for rampant corruption in all parts of daily life and especially law enforcement.

The fact that the scammers even prey on elderly people is simply disgusting. As far as avoiding such an issue for travelers going through Manila the only advise I can give is to keep an eye at our baggage at ALL times, especially around the checkpoint. Try traveling with a bag that doesn’t have external pockets and which is locked. Alternatively you can always use these plastic wraps that are available in the terminal but a bit impractical for carry on. Once past the security checkpoint you can dispose of the wrap.

This is a huge blow to the reputation of the country and puts a question mark in the minds of many travelers. I’m usually not scared of such things and my luggage is pretty safe but I decided to not start any more Singapore Airlines award tickets in Manila just to avoid the fuel surcharge. The potential hassle isn’t worth it. 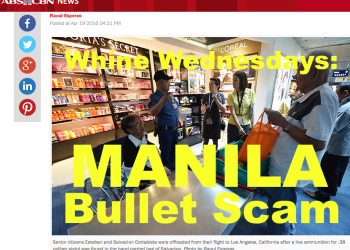