A LoyaltyLobby reader sent me an email about checked luggage delivery delay that caused issues during a holiday. 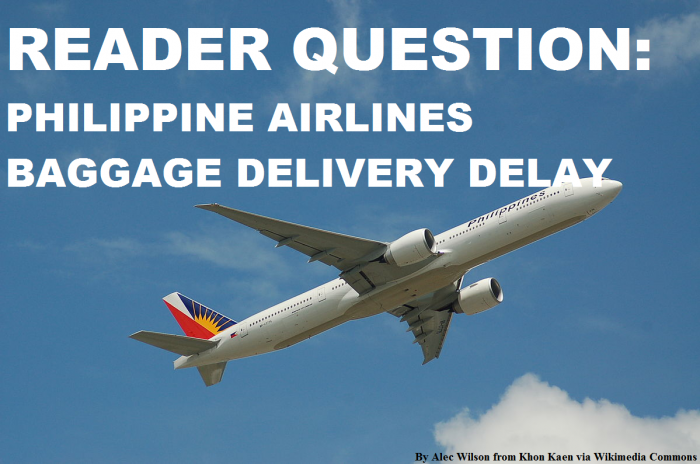 Please see below an email I sent to Philippine Airlines this morning.

I travelled with Philippine Airlines from Dubai to Manila on 18th April 2016.

· Upon arrival I was informed that my bag was delayed due to mechanical failure at Dubai Airport but was guaranteed that it would be delivered to Manila 24 hours later. As a result I delayed my onward travel to Boracay at my expense and stayed in a hotel next to the airport.

· The following day I went to the airport to collect my bag to be told it had still not been sent to me. As a result I left my forwarding details and was promised that my bag would be delivered to my hotel in Boracay – I left to travel to Boracay with only the clothes I was wearing as a result of assurances given by Philippine Airlines.

· The following day I was contacted by Philippine Airlines and sent a claim form by email.

· This morning I arrived back in Dubai and within one hour was contacted by Philippine Airlines to tell me that my bag arrived in Manila yesterday.

· This incompetence by Philippine Airlines and your agents completely destroyed the holiday of a lifetime for me.

· I am a size 4XL and for the whole time in Boracay had only the clothes which I arrived in Manila wearing.

· If Philippine Airlines had been honest with me I would have bought clothes to replace those lost while I was in Manila. But you were not honest. And this dishonesty destroyed my trip.

Please advise why this happened and how you plan to rectify the issue caused by Philippine Airlines.

John – I’m a little in the dark as to what my rights are here… Please can you advise.

It is always very unfortunate when checked in luggage is delayed and it has happened to me numerous times over the years, although nothing has ever gone completely missing.

Once, I was on a six weeks around the world trip and Air Canada managed to leave my bag to Toronto on the first segment and didn’t see it again before I had already back at my origin at the time (LAX).

First of all, I always try to travel with just my carry on and I never check anything that I cannot afford to lose.

You should always go and buy whatever you need when the baggage is delayed and then claim from the airline later. I do understand that this is not always possible.

I tried to Google whether the Montreal Convention had been implemented in the Philippines that defines the airline’s responsibility in case of delayed/lost bags. I found info that it had been ratified back in August 2015 and it is supposed to implemented this year. The airline would have been responsible for up to $1600 in expenses due to the delay (1,131 SDR – Special Drawing Rights).

Now that you are back to your origin and if you don’t have any receipts for the purchases due to the delivery delay by Philippine Airlines, you may be able to get dollar off voucher to be used with the airline in the future. Airlines are not very good at compensating baggage delivery delays unless you have receipts.