NYT: “Catching a Flight? Budget Hours, Not Minutes, for Security”

The New York Times today ran an article about TSA security check point lines that are getting out of control and sometimes take hours, leading to missed flights and aggravation. 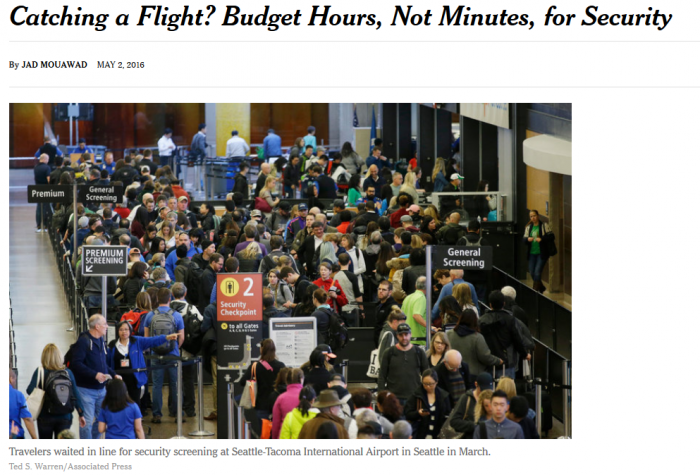 TSA is blaming a good economy and generally more passengers that have lead to these increasing wait times. They would like to have more people to pony up and pay for the Precheck.

Here’s an excerpt from the NYT article that you can access here:

A combination of fewer Transportation Security Administration screeners, tighter budgets, new checkpoint procedures and growing numbers of passengers has created a mess at airports around the country. In recent weeks, passengers have reported epic lines at T.S.A. checkpoints, causing heartburn and angst, as well as missed flights.

Charlotte Douglas International Airport in North Carolina recently said it had experienced three-hour wait times. Brent D. Cagle, the airport’s interim director of aviation, complained to the T.S.A. director that about 600 passengers missed their flights on Good Friday because of an inadequate number of screeners. He called the episode a “fiasco.”

The audit found that agents had failed to spot weapons and explosives in 95 percent of the undercover tests. The findings prompted criticism by some former and current T.S.A. employees, who claimed that the agency was keen to keep passengers moving quickly through the lines.

Well, you can only hope that the TSA, US airlines and airports can get this staffing issue fixed before the summer travel period begins. The solution is not having to come to the airport three hours in advance and then waste couple of hours in the security “theater” line.