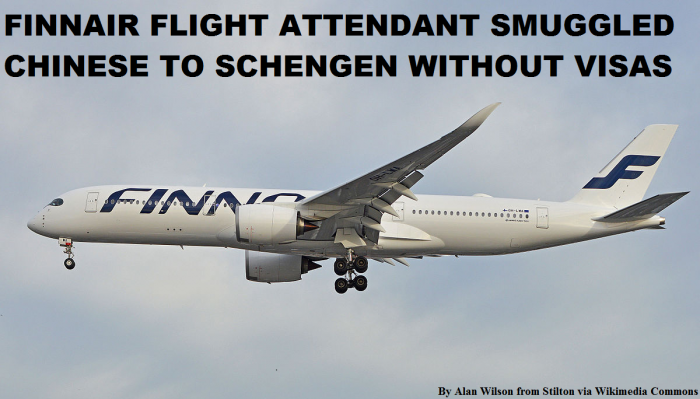 The passengers were ticketed to fly to Russia and had proper Russian visas on their passports. The flight attendant, however, let them to Finland using side doors at the Helsinki-Vantaa airport bypassing the passport control and most of the passengers continued then to Central Europe.

The flight attendant is Chinese national and hired by a Finnair’s subcontractor. Many of the Finnair’s Asia flights are nowadays manned with contract crew and only the cockpit is from Finland. He has confessed to the crime but denies to be part of a crime ring.

The flight attendant apparently charged 10,000 euros per passenger for his services and smuggled more than 30 people.

I have wondered this many times when arriving to foreign airports. It would be very easy for the ground people to let people in without going through passport controls by bussing them to domestic gates or letting them to the domestic are of the airport.

There have been few cases in the past year where passengers were let in to the domestic arrival in the US and some Asian country without going through immigration by a mistake. At least in the US, the passengers were advised to return to the airport to fulfill the immigration requirements.

My personal opinion is that it is ridiculous for Finnair to basically outsource the cabin crew on many of the Asian flights to subcontractors that pay very little.

Today’s Airfare of the Day goes to Finnair and their business class unbundled (no checked luggage/seat selection/lounge access) one way...

Airfare of the Day [Business Class] FINNAIR New York to Berlin from $1,866

Today’s Airfare of the Day goes to Finnair and their midweek business class excursion round trip fares between New York...

Finnair is about to start direct flights from Stockholm to Bangkok, Los Angeles, Miami, New York, and Phuket for the...