It’s crazy weekend again in the U.S. and in the middle of it all a decorated Economist who is a professor at the University of Pennsylvania found himself being profiled for doing some math scribbles while on the plane. 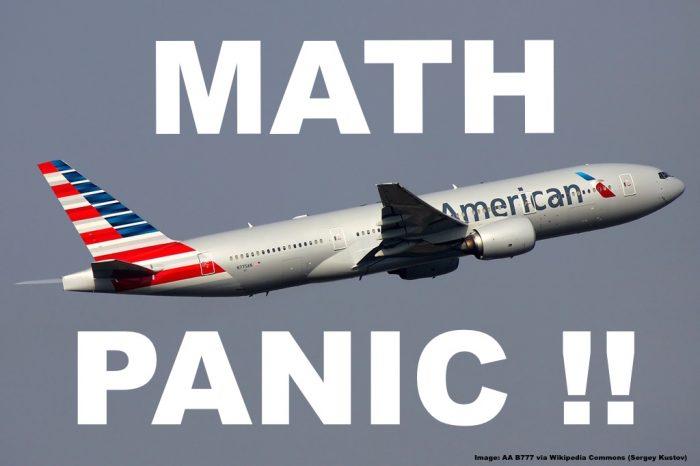 This incident took place on an American Airlines commuter flight from Philadelphia to Syracuse where the passenger held a talk at a local University.

The passenger Guido Menzio is a prominent Italian Economist who has a southern European appearance for obvious reasons and while waiting for his flights departure decided to make some work notes which in his case means doing math.

… The curly-haired man tried to keep to himself, intently if inscrutably scribbling on a notepad he’d brought aboard. His seatmate, a blond-haired, 30-something woman sporting flip-flops and a red tote bag, looked him over. He was wearing navy Diesel jeans and a red Lacoste sweater – a look he would later describe as “simple elegance” – but something about him didn’t seem right to her. …

Rebuffed, the woman began reading her book. Or pretending to read, anyway. Shortly after boarding had finished, she flagged down a flight attendant and handed that crew-member a note of her own. …

Finally the pilot came by, and approached the real culprit behind the delay: that darkly-complected foreign man. He was now escorted off the plane, too, and taken to meet some sort of agent, though he wasn’t entirely sure of the agent’s affiliation, he would later say.

And then the big reveal: The woman wasn’t really sick at all! Instead this quick-thinking traveler had Seen Something, and so she had Said Something.

That Something she’d seen had been her seatmate’s cryptic notes, scrawled in a script she didn’t recognize. Maybe it was code, or some foreign lettering, possibly the details of a plot to destroy the dozens of innocent lives aboard American Airlines Flight 3950. She may have felt it her duty to alert the authorities just to be safe. The curly-haired man was, the agent informed him politely, suspected of terrorism.

The curly-haired man laughed. He laughed because those scribbles weren’t Arabic, or another foreign language, or even some special secret terrorist code. They were math. Yes, math. A differential equation, to be exact.

Menzio showed the authorities his calculations and was allowed to return to his seat, he told me by email. He said the pilot seemed embarrassed. Soon after, the flight finally took off, more than two hours after its scheduled departure time for what would be just a 41-minute trip in the air, according to flight-tracking data.

The woman never reboarded to the flight.

She might have just as well forfeited her seat out of embarrassment. What a pathetic incident! The passenger put it in perfectly phrased way:

Menzio for his part says he was “treated respectfully throughout,” though he remains baffled and frustrated by a “broken system that does not collect information efficiently.” He is troubled by the ignorance of his fellow passenger, as well as “A security protocol that is too rigid–in the sense that once the whistle is blown everything stops without checks–and relies on the input of people who may be completely clueless. ”

I concur that math was my enemy number one back in University but I probably wouldn’t go as far as reporting someones work notes to the flight attendant as ‘threatening’ and setting a process in motion that grounds the plane for over two hours.

These profiling incidents are getting out of hand considering this is the third case within the course of a months that made headlines. I get a ‘better be safe than sorry approach’ but let’s not forget we’re talking about passengers here who all underwent TSA screening (not that this means anything considering the colossal failure rate of their performance). Passengers have recently been escorted off planes for various ‘suspicious’ things including phone calls in arabic. This case was just the most outlandish one to date.