Now that the merger negotiations between Starwood and Marriott are finally over, customers of both chains were surveyed about their opinion in regards to a merger of the two popular loyalty programs. 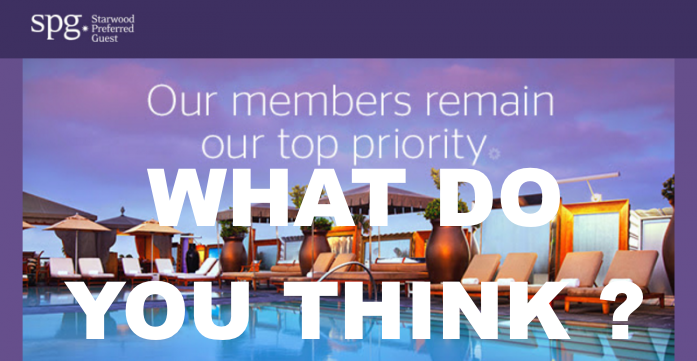 Mergers of programs usually mean nothing good for at least one side because rarely are all positive aspects which members love retained.

Starwood Preferred Guest and Marriott Rewards are two completely different programs and both companies have a different corporate spirit as well. Even though that doesn’t necessarily have to be a negative it still represents a big question mark for members when it comes to the question of what happens when both loyalty programs will be merged into one.

The Washington Business Journal (access here) has an article that reflected on the reaction of SPG members to potential merger into the Marriott Rewards scheme.

Loyalty members may not be freaking out as much as they once were when the Stamford, Connecticut-based hotelier first announced it would sell to Marriott International Inc., according to a new survey of hotel rewards program members.

I’m not sure how to interpret this result without knowing the exact questions and demographics of this survey to be honest. One thing isn’t too surprising though.

Unsurprisingly, SPG’s highest-level elites — its Platinum Preferred Guests, who benefit the most from the program — showed more concern about the merger, according to Dave Pluchino, vice president of Phoenix’s travel and leisure division. A total of 64 percent of Starwood’s most elite members said they’d prefer the program to keep the Starwood format, while 25 percent said they’d be more open to adopting Marriott’s.

Key findings from the research showed that approximately two out of three FGP members are concerned that when Marriott acquires Starwood, program rules will become more complicated (58%), points will expire sooner (57%), and it will be harder to reach elite status (56%).

I would make the case that presently members it very good at SPG as far as benefits are concerned. This would certainly change for the worse even though Marriott has rolled out a few additional benefits.

Let’s not forgot though that it is much harder to get Marriott Platinum status vs SPG Platinum as the current minimum qualification levels for SPG Platinum would only get you Marriott Gold where benefits are rather dismal.

It’s still way too early to speculate and waste nerves over how the program will look like 1.5 years from now. When the time comes I’d think that there will be an easy start for members such as Platinum with SPG would be given Marriott Platinum and after this the regular qualification criteria applies.

There will be ample opportunity to try it out and see it the new program is for you or if you prefer to stick with competing programs such as Hilton HHonors, Hyatt Gold Passport or IHG Rewards Club. What do you think awaits us in the future with these two programs in question?