Whine Wednesdays: Passengers Standing Up Before The Aircraft Reaches The Gate!

It’s another Whine Wednesday and today I want to talk about something we have all experienced way too often: Passengers jumping up immediately after the plane touches down and don’t wait for the gate.

Even worse, many of them start to open the overhead bin and grab their bags or other belongings while the plane is still moving.

The same thing happened yesterday again on my flight from Doha to Cairo where right after touching down and the aircraft was already speeding down the runway a lady got up and opened the bin and then remained standing as pictured until we reached the gate.

This Qatar Airways B777 has the flight attendants seated in a way that they can’t look into the cabin so nobody told plant her behind back on the seat.

Even worse, she left the overhead bin open during the entire time as well.

More then once have I see that a passenger fell pretty badly when the plane came to an abrupt stop. I know it’s a bad thing to say but unfortunately nothing happened yesterday.

Passengers should just remain seated until the plane comes to full stop, in the interest of their own and others safety. Especially the baggage is a danger as it might hit someone sitting in the seat while taxiing. Observe the crews announcement! 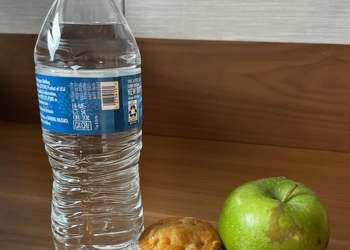 A LoyaltyLobby reader dropped us a note about a breakfast made available to guests at The Charter Hotel in Seattle...