A TSA System breakdown at Phoenix Sky Harbor Airport caused thousands of bags to be left behind because they were unable to be screened in time for their flights. 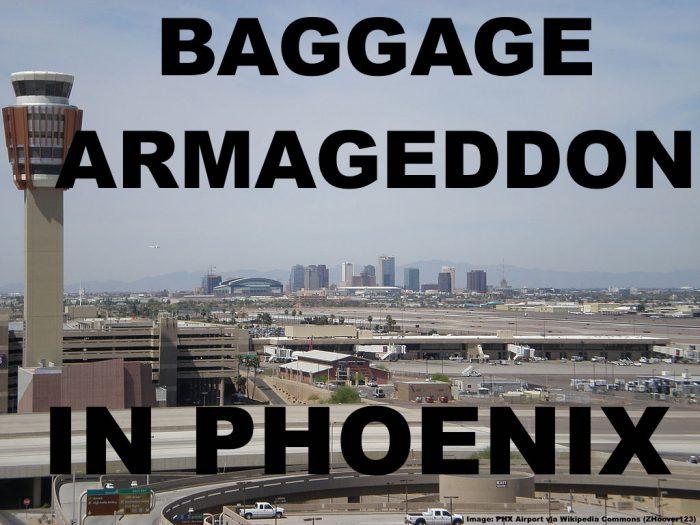 Bags started to pile up by the thousands to the point where they had to be transported to other airport by truck and processed there to be delivered to their owners.

Thousands of checked bags piled up Thursday at Sky Harbor Airport in Phoenix after technical issues with computer servers prevented the Transportation Security Administration from using machines to screen the luggage.

Many of the bags were stacked up in a parking lot while their owners went on to their destinations.

I would estimate that 3,000 bags represent about 12-14 full domestic flights worth of baggage based on estimates that not every passenger checks bags while others check 1-2 etc.

The problem began Thursday morning at 6:45, the TSA said. Officers switched to an alternative system and brought in additional bomb-sniffing dogs as the bags kept coming. Later in the day, officials brought in tractor-trailers to take some of the bags to other airports.

Officials advised passengers to go to the airport early and to avoid checking bags when possible. Flights where leaving as scheduled.

This is a very bad situation as people were forced to rearrange their belongings last minute and it’s easy to miss essential items when you’re under stress. Once checked in and you have a baggage tag the airline is responsible for the delivery of the bag as well as compensation for replacement items if necessary.

As always it pays off to travel light but also have a suitable baggage insurance in instances where that is not possible. Hopefully the passengers will be reunited with their baggage soon but if not a proper insurance that pays replacement items such as the one included with the American Express Platinum Card is a life saver. Even though the airline is responsible to cover such items as well, dealing with U.S. based airlines in such matters is a real pain especially if you don’t have status with them.