Sunday is Compensation Clinic day and I want to highlight a case I opened with Cathay Pacific last week regarding a flight from Bangkok to Taipei in December. 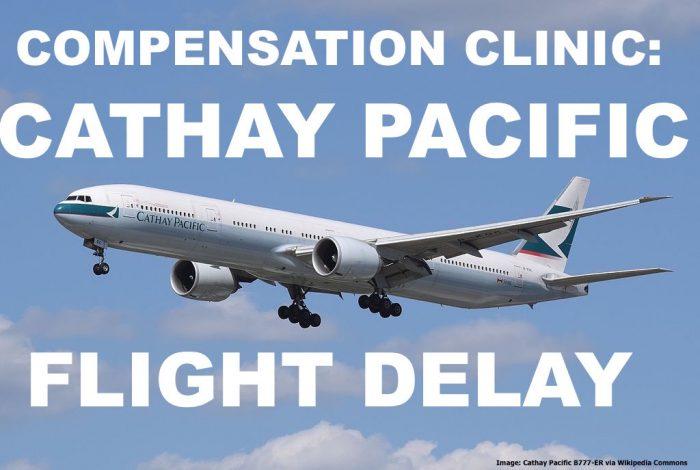 I almost forgot about this incident but after finding old boarding passes I decided to send a complaint note to Cathay which resulted in a nice number of miles as compensation.

Flying out of Bangkok many times per year I find that oneWorld and especially Cathay Pacific/Malaysia Airlines have some great deals available, combating Thai Airways sky-high prices ex BKK. Especially with the new Cathay Pacific lounge which opened last year at Bangkok Airport it’s really great to use oneWorld instead of Star Alliance.

Anyway this time I purchased a one way ticket from Bangkok to Taipei with a 1 day stopover in Hong Kong. Boarding was already delayed for 20 min and after everyone was on board and seated the dreaded cockpit announcement of ‘technical issue’ came one and the delays started to pile up.

Eventually the captain announced the problem couldn’t be fixed and everyone had to deplane. At the same time I called Cathay Reservations who are as flexible as a lantern pole and only said they couldn’t see anything wrong with the flight and I’d have to talk to the airport to be re-booked on an alternative flight. There are plenty of Cathay flights ex BKK to HKG, in fact there is one every hour which is quite amazing. Upon deplaning they tried to keep everyone in the boarding area which is complete nonsense and a total waste of time. I gave them my boarding pass and told them to take me off this flight for now and that i’d be going to the lounge to get re-booked or figure out an alternative flight.

At the lounge it took a phone call of 10 minutes to the ticketing desk outside to get re-booked onto a flight that was just in the process of boarding. I eventually reached Hong Kong with about 2:40h delay (the flight itself would have taken only 2:20h) and the baggage didn’t reach us until next day in Taipei.

I complained about this to Cathay Pacific Customer Relations and received the following reply:

We place great emphasis on punctuality as we know how important it is to our customers. There are, however, occasions when we are not able to operate according to our published schedules. As per our records, I understand your flight was delayed due to a mechanical problem. Unfortunately, the repair work took longer than we originally anticipated. I apologise for the inconvenience this delay caused you. As safety is our top priority, we will only operate a flight once we are confident that the problem has been fixed.

In such situations, we expect our staff to manage the disruption efficiently and I am sorry if you felt that our staff did not assist you in an efficient manner. I apologise for the disappointment and inconvenience caused by the prolonged handling on this occasion.

In view of your disappointment, I have credited 7000 Asia Miles to your account, which you will see in your next statement. I hope this will go some way to restoring your faith in us.

The amount of Asia Miles credited appears to be a standard compensation Cathay has for such cases as it’s not the third time I have received this amount within two years for similar issues.

I shouldn’t have waited 5 months to hand in this complaint but I’m happy I got around doing so. While 7k Asia miles are not worth much by themselves if you have such compensations pile up (especially for delays of which Hong Kong has plenty) you can really use them for some worthwhile redemptions. For example Hong Kong-Taipei is only 10,000 Asia Miles and pretty expensive if you purchase a last minute ticket on Cathay.

Under EU rules there would have been a cash compensation due but outside those you have to rely on customer relations to offer a fair option and I think 7,000 miles are a reasonable amount for almost 3 hours delay and the trouble involved.