In the early morning hours today authorities and Egyptair broke the news that one of their aircraft, an Airbus A320 en route from Paris to Cairo with 66 passengers on board has gone missing.

The Airbus A320 which carried a very light load last night has reportedly sent out an emergency signal about 2 hours later but it’s uncertain how reliable that information is as the only source for that right now is Egyptair.

An EgyptAir flight from Paris to Cairo has disappeared from radar with 66 people on board, the airline says.

The Airbus A320 went missing over the eastern Mediterranean, soon after entering Egyptian airspace.

EgyptAir says it received a distress signal before the plane disappeared from radar.

There were 56 passengers – including three children – seven crew members and three security personnel on board Flight MS804, the airline said. 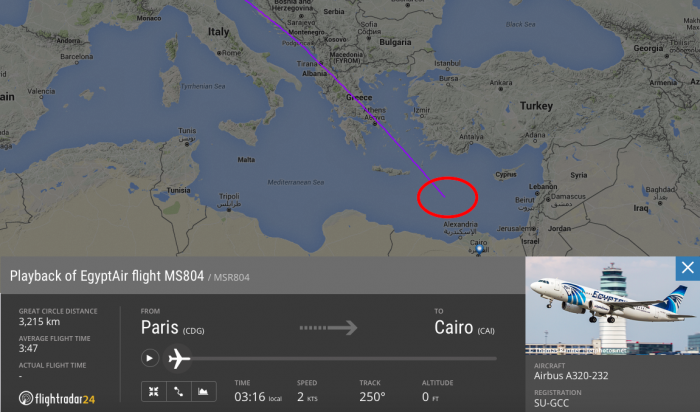 It wouldn’t have been long until the flight had arrived at Cairo International Airport, maybe another 30 minutes. I was just there a week ago, although flying QR/TK on that trip.

Flight MS804 left Paris’ Charles de Gaulle airport at 23:09 local time on Wednesday (21:09 GMT) and was scheduled to arrive in the Egyptian capital soon after 03:00 local time on Thursday.

The Guardian (access here) writes in respect to the emergency signal:

There is some confusion over this new distress signal, reported to have been received at 04.26 local time (02.26 GMT).

But it is possible that the later signal, which has been described in some reports as a distress call, could have been an automated distress signal from an emergency locator beacon.

After the bombing of the Russian airliner last October it’s easy to jump to conclusions however one should reserve judgment of the case until more facts are known. At this time very little information is available as it usually is the case when an aircraft crashes.