It’s Fabulous Fridays again and today we will visit the new Qatar Airways Al Safwa First Class Lounge in Doha to have a glimpse at what took them so long and if it was worth the wait. 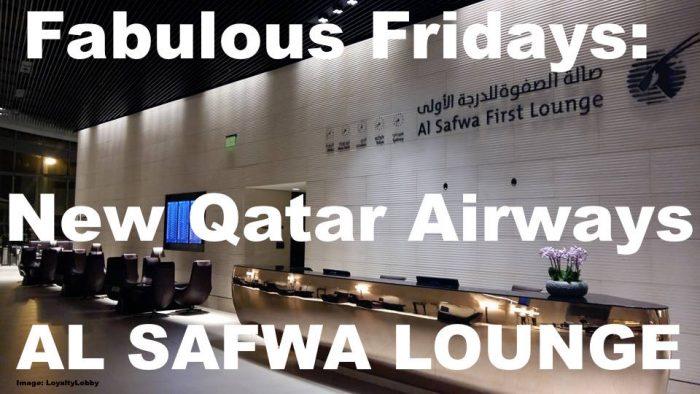 It has taken Qatar Airways forever to open this lounge and put the final touches on it so I was really setting the bar high before visiting it the first time last week.

Qatar Airways lounges for their Premium Passengers are famous for a special edge. First Qatar had the Premium Terminal where Business and First Class Guests were able to relax. Then, with the opening of Doha’s new Hamad International Airport that Terminal was replaced by the luxurious Al Mourjan Business Class Lounge which was serving all of Qatar’s Premium Customers and in the beginning up until early last year also oneWorld Emerald and Sapphire members.

The first cut came when Qatar banned their status customers flying Economy Class from the Business Class lounge to some ugly shack down the hall. This new ‘lounge’ is a disgusting disgrace and I can just warn everybody to refrain from flyin Qatar Economy Class even as a oneWorld Status Member.

For a while then the Al Mourjan was where Qatar First Class passengers were accommodated. I might add that this lounge already exceeds the standard of many if not most First Class Lounges in the world. Think about it, for a long time they served Krug Grande Cuvee at the bar – in a Business Class Lounge!

Then after year long construction and long anticipation it was finally done. The Al Safwa First Class Lounge opened their gates.

On my way to Cairo last week Qatar sells Premium Class flights within the Middle East and North Africa as First Class so I had access to this new lounge even though in reality it was only Business Class on the Boeing 777.

Here are a few impressions. 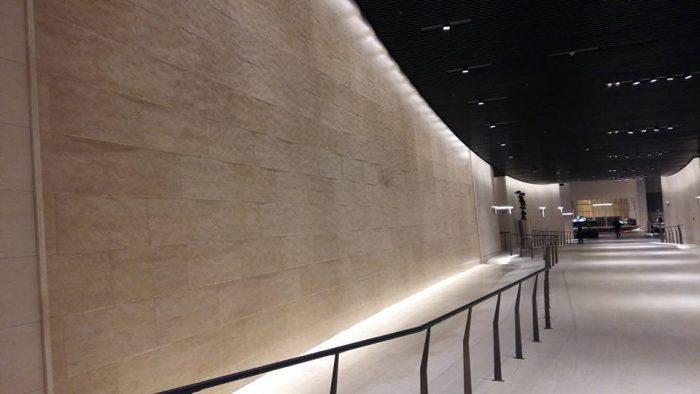 The lounge is kept in a sandstone and marble color scheme and the wall to the left has water running over it. It looks fantastic! 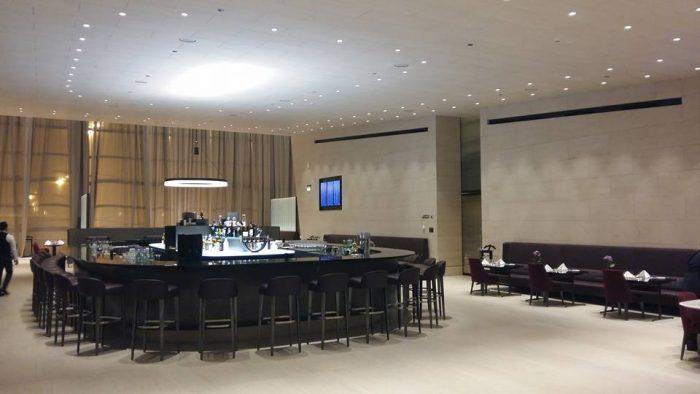 This is the bar where Premium Beverages are provided to the First Class Passengers, including fine Champagnes. 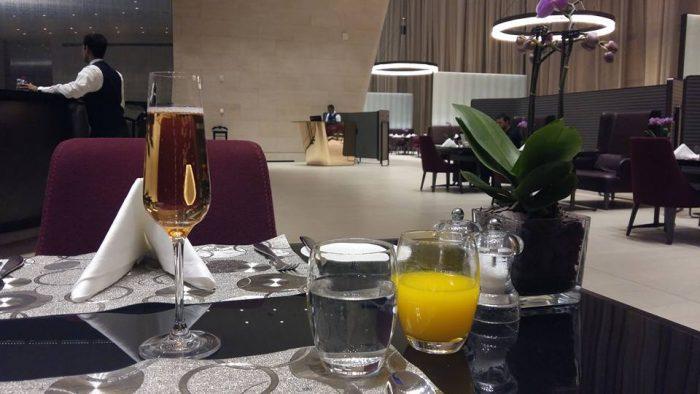 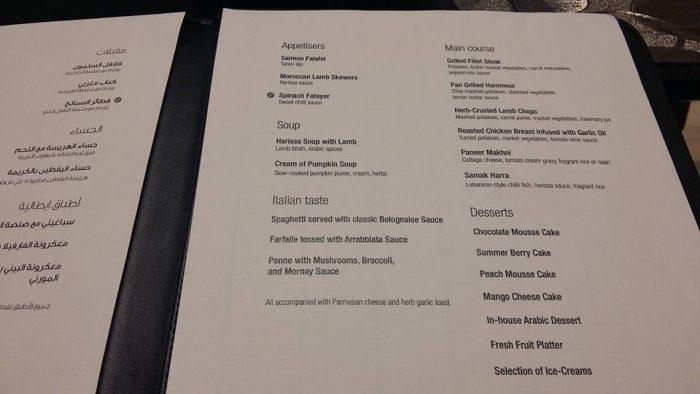 This was the Evening Menu (I arrived at the lounge approximately 1am). I decided to order the Lamb as main dish. 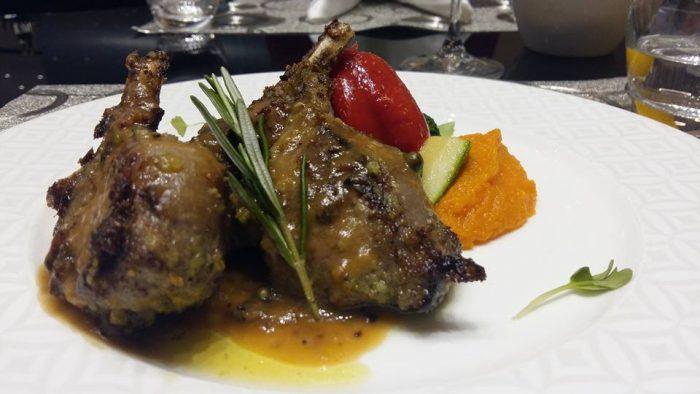 The lamb was excellent. Fantastic with a mind blowing flavor. Probably the best I have eaten so far in my life, I can just recommend to try it when you have a chance (assuming/hoping it will be identical quality). 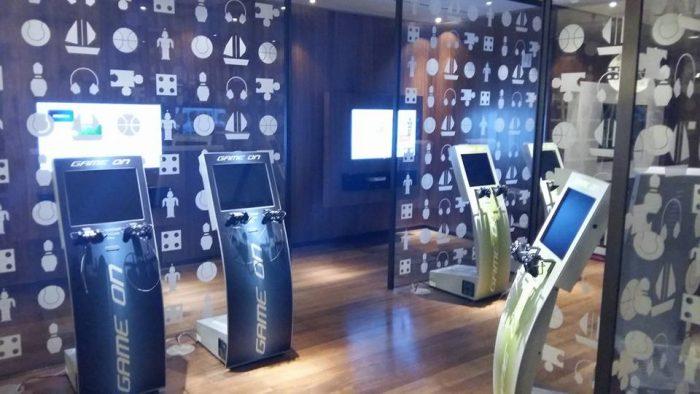 After late dinner I took a walk throughout the Lounge and next to a private Duty Free Shop, a Home Theatre and Play Rooms for children (separated for different age groups) I found the above Game Room where you can spend some time with Playstation, X-Box, Wii and even a Formula 1 Simulator.

Then it was time for a nap until my morning departure at 9am. 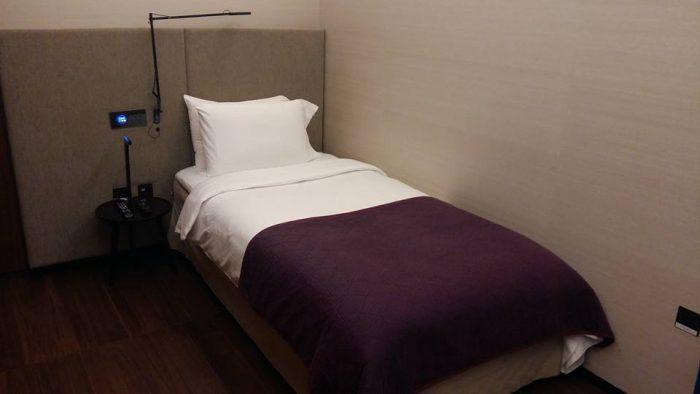 The new Al Safwa Lounge has 15 of these Sleeping Rooms which are basically a fully equipped hotel room complete with TV and your own bathroom. 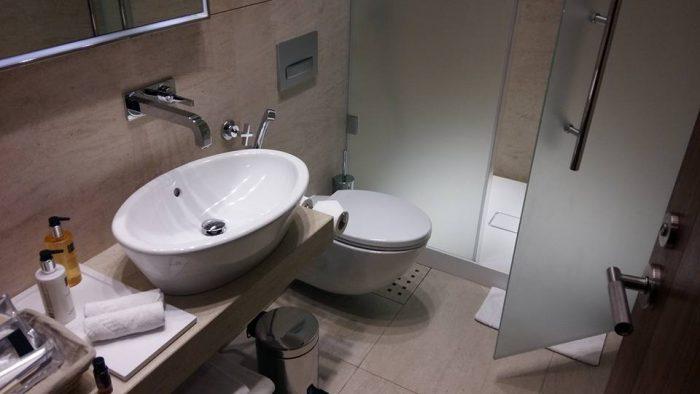 You can use them for your entire time at the lounge so if you have access to the First Class facility it’s not even necessary to attempt to use the complimentary Qatar Stopover Package which in my opinion is one of the biggest scams out there (more about that another time). This fully equipped room doesn’t make it necessary to go to a hotel, especially with the Restaurant etc at your disposal.

In the morning I received a wake up knock as offered before and I was quickly on my way to the gate (FAR away).

The architecture and hardware was all pretty amazing and the fact that I was there during the night gave me ample opportunity to walk around to inspect every corner.

What were the cons of this lounge?

The same problem as in all of Doha Airport, the internet is a disaster. They spent hundreds of millions and can’t get internet to work? That is pretty bad!

This means (as mentioned above) Emerald Status customers (Including Qatars own Platinum Members)  in Business or Economy are not permitted to use the facility. In light of this I think other oneWorld members should also stop giving QR Emeralds access to their First Class lounges.

There is a jacuzzi adjacent to the sleeping rooms which however is part of the Spa and there is a nominal charge for that. I wouldn’t mind paying for a Spa treatment but to use a jacuzzi… no certainly not.

Qatar Airways certainly held this lounge to the highest standard and henceforth the delays in opening the facility. I would say it pretty much sets the benchmark in First Class lounges but sometimes I felt the whole construct a little too monumental to the point where you feel not as comfortable due to the high ceilings.

If you love it very quiet this lounge is great. If you prefer a bit more action you can always go over to the Al Mourjan Business Lounge.