Los Angeles LAX International Airport will see a massive 5.5 Billion USD improvement project that is set to transform the (ugly) face of the airport once and for all. 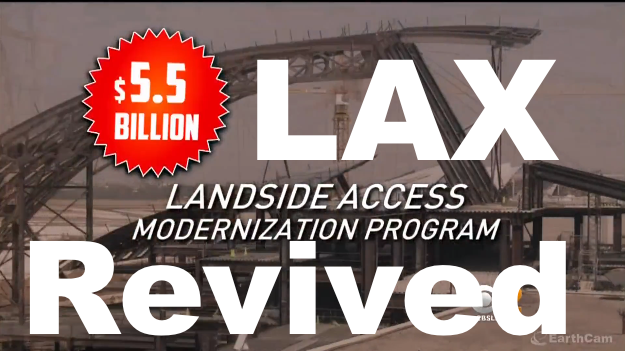 The first phase will be an infrastructure program including a people mover to finally improve transfer experience between the terminals as well as a consolidated rental car facility.

Both of these things are a notorious pain in the rear when flying or transferring at LAX because there is rarely anything I hate more than waiting for buses that obviously rely on the traffic flow around the terminals which is always a disaster at LAX.

CBS News Los Angeles (access here) had a story on it last Thursday.

A $14 billion overhaul is underway at Los Angeles International Airport, the seventh-busiest airport in the world.

The LAX rebuild, which started in 2006 and is expected to continue through 2023, is the biggest public works project in L.A. history.

Construction starts next year on the Landside Access Modernization Program portion, which is a massive $5.5 B project that includes a people mover and consolidated rental car facility. and will take six years to complete. …

For the first time in 30 years, LAX terminals are being remodeled. Concourses, gates, check-in areas and baggage claim are being made over from top to bottom.

But that’s just part of the reconstruction. The biggest chunk of the project’s budget is going to build the Landside Access Modernization Project. It will include an elevated people mover more than two miles long. Passengers will be whisked to pick up and drop off spots, a metro station and a new rent-a-car facility.

LAX just finished completely overhauling the Tom Bradley International Terminal (TBIT) which took them almost a decade. I don’t want to imagine how long it will take until the whole airport is remodeled to a degree that it would be useful in a way to be able to compete on practical terms with airports like Dallas Ft. Worth which is HUGE but has the advantage of the air side tram helping passengers to connect.

There are some graphics how the architects imagine it to end up.

It will probably take a good decade and a half minimum until it will really look like this since the airport has to stay in operation while building and renovating. It’s not just as simple as building a completely new airport in open terrain.

… More than 70 million passengers every year. Every one of them could face more hassles and delays, once construction begins.

“We ask that you be patient with us understand that there is a lot of challenges through all the construction,” said LAX’s Chief of Planning Cynthia Guidry. “But you will be proud in the end because you will along with everyone else will be able to stand and  be proud of the great accomplishment.”

Not sure this is a lot of motivation. I have to say though that the new TBIT looks fantastic and more like a first world airport, not like the disgrace and embarrassment it was before.

Renovating existing airports is a challenge as can be seen by many examples such as London-Heathrow, Paris, Frankfurt and yes… Los Angeles! Even Hong Kong is nowadays choked with traffic and desperately trying to expand but it reaches capacity issues both in landmass and airspace, henceforth the massive delays.

Neighboring China usually just builds completely new airports as it’s currently being planned for Beijing where the current Capital Airport in the North will be replaced by a brand new one in the South-West of the city. Good luck for everyone in Los Angeles, this project sounds like a first class nightmare!

Singapore introduced this fall Vaccinated Travel Lane (VTL) to mainly facilitate business travel between a few countries that will expand...

Indonesia's island of Bali, a very popular destination in Asia and the only part of the country that is highly...

Morocco has taken quite a drastic step today and banned flights from the UK, Germany, and the Netherlands effective midnight...