Today’s Compensation Clinic brings us to the Le Meridien Cairo Airport in Egypt where I had the third stay in a row that was less than perfect.

The Le Meridien is connected to Terminal 3 at Cairo Airport and very convenient if you want to stay in a modern hotel close to the airport and Cairo in general.

Cairo doesn’t have many great options when it comes to hotels especially from the big chains. The properties are usually old, not well taken care of and the staff more often than not completely incompetent.

So far the Le Meridien Cairo Airport was the best option for me and this is the third time I’ve been staying here.

The first time I opened the door and a huge carpet cleaning machine was sitting in the living room. After the stay the 500 points platinum amenity bonus was missing.

This time I arrived in Terminal 1 on Qatar Airways which is a disgusting experience. I knew from my previous departure how far the terminal is away from the Le Meridien (Terminal 3). Though there is a monorail connecting both terminals it’s still required to walk quite a bit through dirty, not to say filthy areas including right through a construction side of the new Terminal 2 which is pretty dangerous with equipment dangling everywhere.

I instructed the hotel prior to my arrival to send a driver to pick me up at Terminal 1 and that I’d be paying for that. Needless to say nothing happened and nobody was there. After making my way through the described areas (took 35 min in total) I took the overpass to the Le Meridien. In front of the elevator I slipped on the floor because someone was wet-cleaning it without putting up a sign. The elevator was defective as well and the door did not open automatically at Lobby Level.

Even though the room was paid with points the hotel authorized a rather large sum of money on the Credit Card after which I summoned senior management to discuss the problems upon arrival.

I accepted a dinner invitation to the hotels Mezzeh Lebanese Restaurant which was fantastic. There was no seating upstairs at the lounge anyway – when I went there ahead of my dinner there wasn’t a single seat available. I took two beverages down to the pool and subsequently went to dinner. 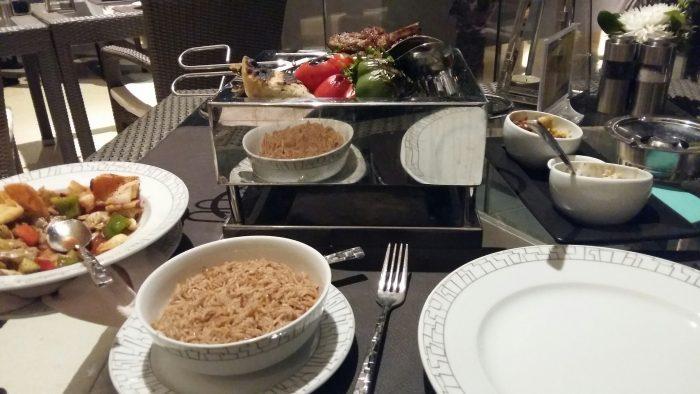 The pricing at the restaurant is very reasonable and if you stay at the hotel I can definitely recommend you eating there!

I would have left it at that if it wasn’t that after my departure the Platinum Amenity was again missing.

It appears that the hotel intentionally puts in another coding for the amenity as it was the third time in a row that I have this problem. I complained to Starwood Platinum Concierge and had the points added manually. In addition I requested 2000 Starpoints to be refunded to my account (50% of the stay) which arrived a few days later.

I wonder how many guests don’t notice if the amenity points don’t post correctly and the hotel gets away without paying SPG for these 500 points per stay. I never choose the local amenity since it’s usually some junk that is of no use to me.

When talking to Starwood I suggested to audit the hotels records and customer complaints to see if there is a pattern of missing amenity points. Things like these cost a lot of time to be corrected so I have no problem hitting back at the property and request additional compensation on top, especially after all the problems encountered.