So far the only hotel option at the terminal was the Novotel which often has rates beyond 200$ a night and is for obvious reasons not in everybody’s budget.

The new BOXTEL offers as the name suggests compact sleeping rooms with rates calculated on an hourly basis. In March a similar option opened at Bangkok’s second airport Don Mueang (we wrote about it here).

To get an impression you can visit the Boxtel Website (see here) that offers information and booking options. The hotel is also bookable on booking.com.

I saw their sign by coincidence when I walked past it towards the Airport Rail Link last week so you need to go to the Base Floor where the train is located and follow the long corridor as shown in the graphic below. 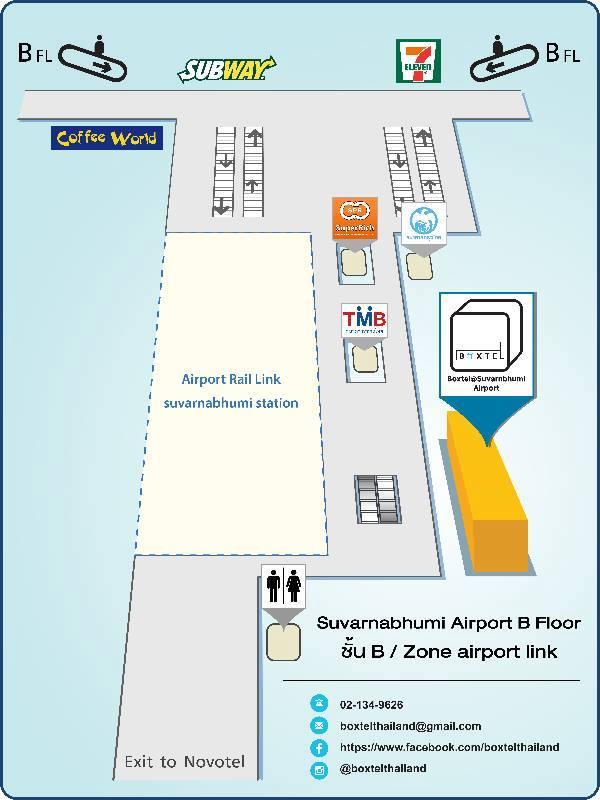 For a stay of 6 hours one should budget about 60$ and just as I said in my other article, these hotels are not CHEAP but rather priced in a decent manner.

This only makes sense if you have a brief overnight at the airport while continuing on the next morning in the early hours such as a reader wrote us last month who flew in on Delta Airlines and flew to Phuket the next morning. If you don’t want to go into the city that is.

The price is reasonable but if you spend more than a few hours then you might want to consider staying in the city instead.

For the pricing outlined it is no problem to find a decent 3/3.5 Star hotel for a full day use anywhere in Bangkok however these wouldn’t be right at the airport.