An unruly, aggressive passenger on board a Lufthansa flight from Munich to Vancouver lead to the aircraft making an emergency landing in Hamburg where the culprit was arrested. 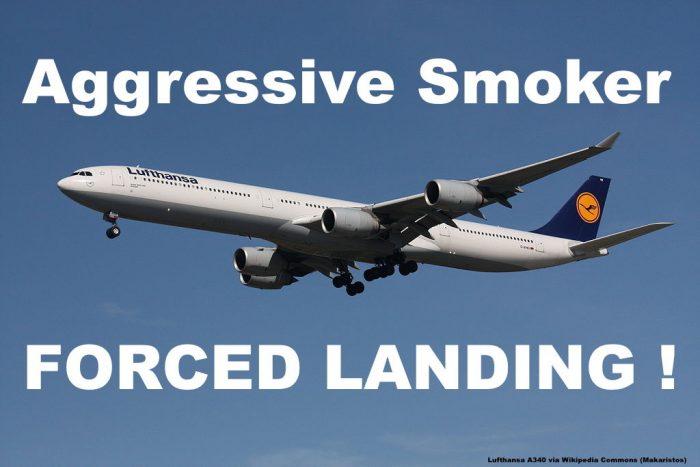 The mans escapades that includes trying to open the aircraft door in cruising altitude eventually lead to a 3 hour delay of the flight after he was taken off the plane.

This must have been some bizarre and scary inflight entertainment on Lufthansa flight LH476 when a passenger right from the start of the boarding process gets difficult which later escalates in all sorts of irratic actions. From screaming, lighting a cigarette, trying to open the rear door to to eventual emergency landing… all was included in this flight.

A Vancouver-bound Lufthansa flight was forced to divert from Munich to Hamburg after a passenger’s erratic behavior threatened safety, according to a fellow passenger.

Lufthansa officials confirmed that flight LH476 was diverted to Hamburg where the passenger was removed.

Hamburg police confirmed that a rescue crew, including a doctor, met the man and diagnosed him with a mental disorder. He was taken to a local psychiatric facility. There is no active police investigation into the incident.

Had this happened in the U.S. (or in Canada for that matter) he’d be in jail now with plenty of charges pending. He can be lucky that German authorities take a more humanistic approach to the matter.

It was reported that there was a man in the back of the plane screaming and yelling and apparently tried to open the back door of the aircraft at 38,000 feet,” said passenger Dan Iosch of Vancouver, who at the time was seated in first class.

“Apparently at the beginning of the flight he was being a little difficult, but they decided to take off, ” said Iosch, who said he listened to the drama unfold over the in-flight announcements.

“I guess once we got in the air he got more and more agitated and he tried to light up a cigarette. He was yelling and screaming,” said Iosch, who watched as the man was forcefully escorted from the Airbus A340-600 by paramedics and other officials.

Flightradar shows the aircraft circling over the North Sea before landing at Hamburg Airport. 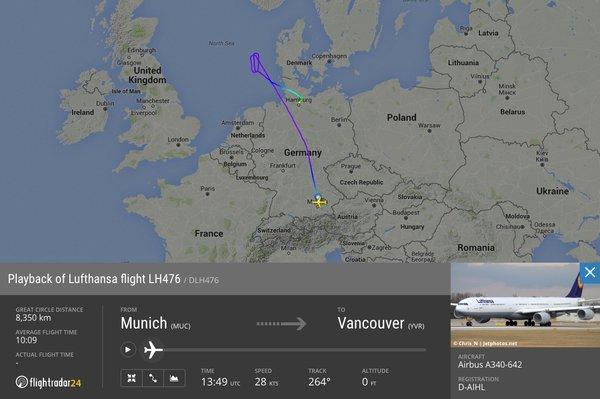 I wonder if they had to dump fuel before making their landing. The trip to Vancouver is 5,194 miles so for sure the A340 was filled pretty well.

Good that this incident went without any injuries or worse. Of course trying to open the door at that time is a futile attempt but it still scares the hell out of people and makes the situation even more difficult considering the mans behavior. Let’s hope he gets proper psychiatric treatment that can help him.

Even though no criminal charges have been filed the airline can seek to recover financial damages through civil proceedings. The article doesn’t mention the offenders nationality or other details.