Manila Airport (NAIA) has yet another scam problem on it’s hand involving their baggage porters that was made public by an official complain of the local Delta Airlines station manager. 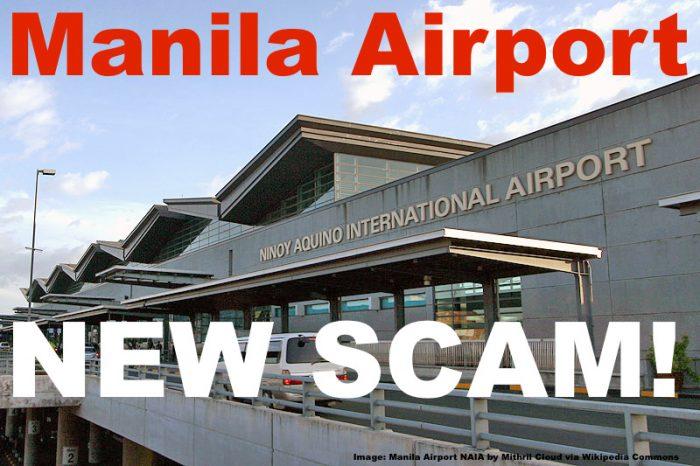 A Delta Airlines employee from their Atlanta Headquarters was scammed out of of least 2000 Pesos (~50 USD) while interacting with porters at the NAIA3 Terminal in Manila.

The newest method is that these porters approach passengers waiting in line and scaring them to belief that they were in danger of missing their flight. The porters then offer to sneak passengers through the long lines for a payoff. In this published case they were asking for 2000 Philippine Pesos (~ 50 USD).

The Philippine Star (access here) reported about the incident this weekend.

In a complaint filed before the Airline Operators Council, American Gary Charles Glass, 56, an employee of Delta Air, said that on May 3, he had just arrived at the terminal’s curbside when a porter approached him.

He said the porter told him he would not make his flight due to the long line at the entry to the terminal, but for P2,000 the porter would expedite his luggage to the airline counters.

Glass said two more porters approached him and said the P2,000 was to pay off security personnel and they had to have more money. He reported the incident to airport police officers on duty and later to Delta Air station manager Maria Rosanna Ocampo.

Ocampo, in a letter to NAIA-3 manager Octavio Lina, identified Glass as an employee from the airline’s Atlanta headquarters and was on company business when he became the victim of a scam at the NAIA-3 departure area curbside checkpoint screening.

She said Glass “was intimidated” by the porters and he gave them money for fear that he would indeed miss his flight and he would lose his belongings when “these three porters were harassing him at Gate 4.”

That sounds about right for Manila airport based on my personal experience. I for one politely decline such offers because even though there are often long, if not massive lines they tend to move along alright. And if not it’s the airlines problem as long as I’m at the airport on time which I usually am.

I don’t understand why an airline employee on business travel would fall victim to such a scam in the first place. Shouldn’t these people be more seasoned travelers?

The story highlights there were previous cases such as this at the same terminal.

Ocampo said she had reported similar incidents involving Delta Air’s customers, “who were traumatized by the deceit, interruption and inconveniences” caused by the porters.

“Delta Air Manila is determined to pin down these unlawful acts hurting Delta’s brand and NAIA in general,” she said.

Ocampo identified the suspects as Porters 186, 326 and 316. She also said that effective immediately, Delta Air will no longer allow D’Prada porters to loiter around the airline’s area during a flight departure.

“They need to leave immediately after their baggage assistance to the customer,” Ocampo said.

On May 6, Lina told Ocampo that the porters were interrogated by the airport police and endorsed to the assistant general manager for operations for termination of employment.

It always takes a high profile case and someone who stirs up enough trouble for things like this to be taken serious, especially in places like Manila and other South Asian locations. Dirty business is a common occurrence there and the usual way to solve it is not to talk about it. How long is the infamous Lag Lag Bala ‘Bullet’ scam (we report about it here) going on without someone doing anything about it?

Travelers should familiarize themselves with the situation in destinations where they are about to travel to. In a case like this I find it rather obscure that the scammers got a Delta employee who was green enough to fall for their shenanigans so hopefully that is a lesson for this person to do his due diligence in the future.

At the same time I think that NAIA Management and local officials should finally step up to the plate and combat all these scams that are going on at the countries main international airport. Newly President-elect Duterte has vowed to vigorously combat crime in the Philippines so let’s see if his threats have any long term impact on the situation at NAIA.