Long airport security lines across the United States have enraged passengers in the past couple of weeks after the TSA faced a staff shortage and an unexpectedly (really?) high number of passengers. 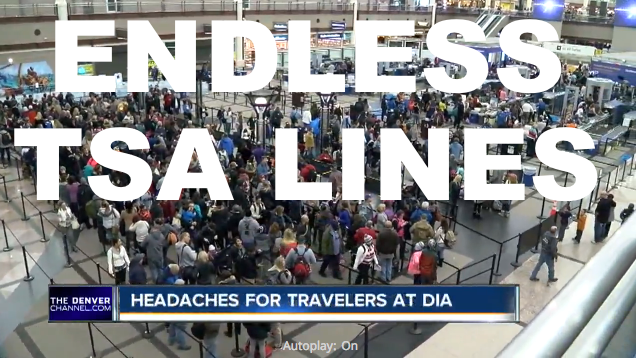 Hour long wait times, missed flights and left behind baggage are just some of the things that brought TSA into the spotlight last week but it is going to be much worse with public holidays around the corner.

What could be more enjoyable than going to the airport and standing in line for almost 2 hours just to get through security?

If you plan on traveling in the U.S. during the Memorial Day weekend or plan for your summer holiday then better brace yourself for these problems becoming much worse as the staff shortage the TSA faces isn’t to be solved on short notice.

The head of the Transportation Security Administration, facing fierce criticism over long lines at airport security checkpoints, said Wednesday that passengers would probably continue to experience longer than normal wait times because of an expected increase in summer travel.

In an effort to ameliorate delays, Peter V. Neffenger, the T.S.A. administrator, told members of the House Homeland Security Committee that the agency was promoting screeners from part time to full time, reassigning hundreds of behavioral detection officers to help on security lines and shifting bomb-detection dog teams to larger airports. Mr. Neffenger’s testimony comes just days before millions of Americans are expected to travel over the Memorial Day weekend. …

“This is not a new rodeo,” said Representative Michael McCaul, Republican of Texas and chairman of the committee. “Why didn’t we see this coming?”

Mr. Neffenger said the long lines were a product of higher-than-forecast passenger numbers, staffing shortages and changes in a program that allowed people who had not signed up for background checks to use expedited security lines. The agency tightened security procedures after federal auditors managed to get fake bombs and weapons past screeners, which has also contributed to the long lines.

In other words the TSA fouled up that much in the past that now after their miserable performance became public they want to avoid another embarrassment and all procedures take extra long. Of course this won’t make travel even a bit safer but just adds to more inconvenience. TSA did not replace staff which had resigned over the past year and just went on performing business as usual with the processing times creeping higher and higher until there was no covering up anymore.

Representative Martha E. McSally, Republican of Arizona, said the agency was distracted from its focus on airport security by operating screening at political conventions and sporting events.

“Where is the authority for supporting things that have nothing to do with the core mission?” she asked.

“It’s a pretty important mission, and we’re the screening experts,” said Mr. Neffenger, who added the screening was typically done in response to requests from the Secret Service.

Of course this refers to the U.S. Presidential Election campaigns and the rallies of individual candidates. Whenever you see these stadiums full of people attending a rally for a candidate keep in mind that these people had to be screened and that work is done by the TSA. Yes you heard that right, the TSA is taking resources away from the airport to facilitate screening for political campaigns. I first heard about it through a friends Facebook post when he attempted to join such an event in New York. Crazy!

Why don’t these campaigns just hire private firms? I almost had to burst out laughing when I read that ‘we’re the screening experts’. I’m not sure the title expert is justified when (per the article) “auditors were able to get fake weapons and explosives past security screeners 95 percent of the time in 70 covert tests.”. No matter if the Secret Service requests this or not. Are these campaigns more important than the operation of airports all over the country?

Mr. Neffenger continued to urge travelers to sign up for T.S.A. Precheck, an expedited screening process that allows passengers to keep their shoes on and keep their computers in their bags. Enrollment in the program has fallen short of expectations, exacerbating the longer lines. He said about 15,000 people a month were signing up for the program.

Pre-Check is a good program that can either be applied for by itself or as part of the Global Entry program for international travelers. Pre-approved passengers of select airlines experience a lighter security procedure as outlined above.

However there have been changes to this program as the Administrator testified as well. What he didn’t say is that these changes involved randomly selecting passengers to enjoy pre-check who were not instructed how to use it and therefore slowing down the entire process, not knowing what they have to do (or what not to do in this case).

This is going to be a long and exhausting summer for travelers especially those who have to travel on a frequent basis. Even TSA Pre-Check isn’t going to be much of a relief because these lines too can dwell to long wait times.

One more option for frequent travelers that have U.S. issued identity documents is to get a membership with CLEAR that is only available at select airports including Dallas, Denver, Houston, Las Vegas, Miami and San Francisco. It bypasses the TSA lineup completely and you will then be screened in a designated area. This system however costs 179$ per year which could be well worth it though if someone frequents the available airports a lot.

Marriott Bonvoy 25% Off Americas Cyber Sale For Stays Through January...