In the past couple of days I’ve seen a  CNN news report being shared in various Facebook groups they did a week ago which featured an American Airlines flight attendant who is now 80 years of age. 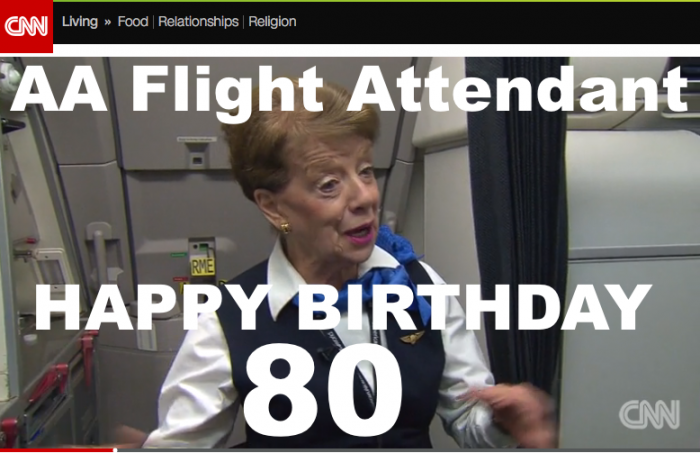 Bette Nash flies in her 58th year of service at various airlines under the same employment which eventually became American Airlines which is her employer today.

The lady became a celebrity of sorts on American Airlines with passengers taking selfies with her and bring her gifts.

You can access the CNN video here which features her bio which as you can imagine is extensive.

Betty Nash started flying in 1958 when the grand days of air travel began and for sure experienced it all. Here is the twitter of CNN’s Holly Firfer who went to interview her that day: 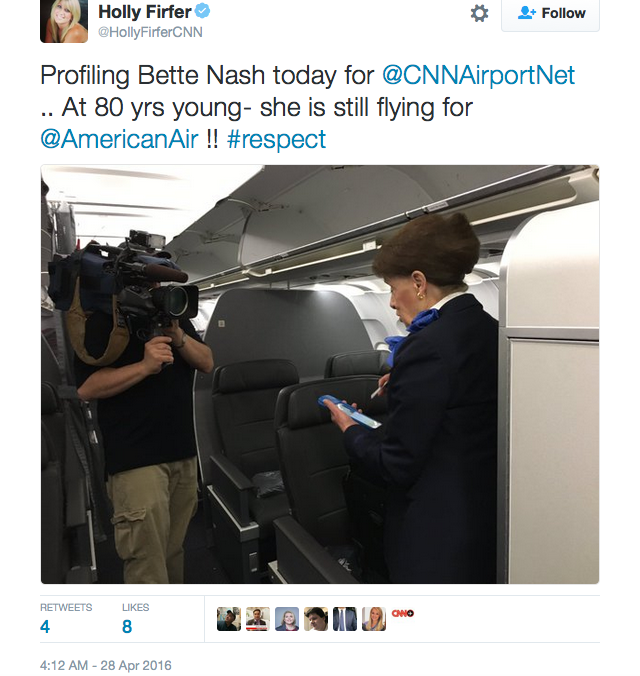 As fun as this all sounds one can not stop wondering if in the worst case scenario someone in senior age can perform all the functions required of a flight attendant in an emergency situation. Especially on domestic flights there are rarely more than three flight attendants on board (one in first class, two in coach) and if there is a situation that requires evacuation such as the Korean Air Engine Fire in Tokyo a few days ago let’s hope she will be up for the job.

Watching the CNN video how she walks in the terminal doesn’t give a lot of confidence. My grandparents are 79 years old and I wouldn’t expect them to run a marathon either.

It’s great that the lady can enjoy her life this way and do something instead of strolling through the park or do knitting which would probably make her depressive. I strongly believe that the service she provides to her passengers is likely much better than any of her junior colleagues (junior at U.S. based airlines is considered anything up to 60 years of age I guess). In any way she probably earns a good living doing what she does. Can you imagine what her seniority pay must be through the union?

There are annual safety training and health checks where crew is being certified to fly and I really wonder what it takes to have a flight attendant pushed out due to lack pf physical ability.