Atlanta’s Hartfield-Jackson airport has not had service from any of the Middle Eastern airlines (Emirates, Etihad and Qatar) until yesterday when Qatar flew its’ inaugural flight from Doha. 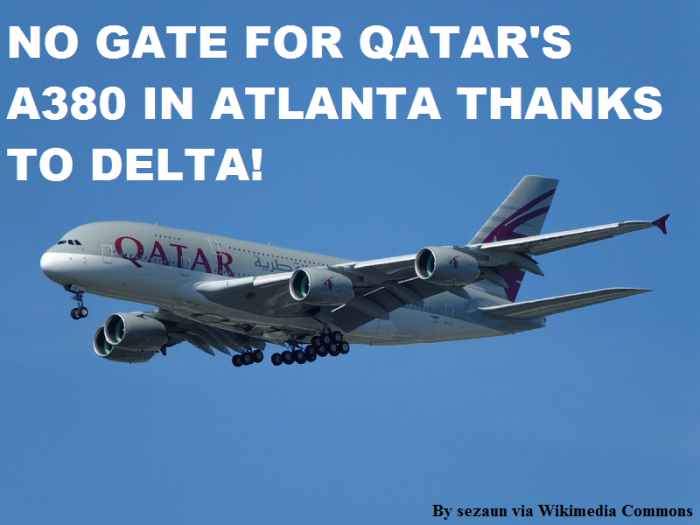 Delta being a good sport was not willing to accommodate the airline on the only A380 ready gate that the airport has.

CNN run a story about the situation today (access here) of which below is an excerpt:

Hundreds of Qatar passengers were inconvenienced in Atlanta. Some wanted to know who to blame for not having a jetway where they could deplane. The airport and Delta blamed the airline for not giving enough notice that it was sending a Super Jumbo to an airport with only one gate that could handle such a big plane.

When asked if the airline gave enough notice to schedule access to the gate, Gunter Saurwein, Qatar Airways’ vice president for the Americas, smiled and said, “In general yes, we gave some lead time that we would be here.”

When asked if Delta may have deliberately prevented Qatar from using the gate, Sawrwein said, “I do not want to comment on that. We as an airline don’t finger point.”

Delta has been the most vocal airline in the United States trying to battle the Middle Eastern three that are expanding their US networks and siphoning international passengers from the US airlines.

Quite a few US airports already have service from Emirates, Etihad and Qatar Airways. Atlanta has been the exception that has now changed. May be Delta is afraid of competition?

Cannot see any other reason for their recent behavior not just with this A380 gate issue but also the Fox theater and Seattle pride sponsorship.

Qatar Airways started their Atlanta service with their A380 flagship, but the route is flown on Boeing 777-200 aircraft . This gate dilemma should thus be one-time issue only.