Sunday is Compensation Day and today we received an email from one of our readers who stayed at the Embassy Suites – Elizabeth/Newark Airport by airline accommodation after his flight was cancelled.

As part of this accommodation the airline issued the customer meal vouchers for dinner and breakfast but what the hotel provided for the value of it was a disgrace.

Airport hotels are used to distressed passengers being effected by flight cancellations and get a substantial part of their business from airlines who issue accommodation and meal vouchers for their customers. Usually airlines have 2-3 hotels in the area as partners with negotiated rates that will accept these vouchers.

A few weeks ago one of our readers was inconvenienced after his flight from New York Newark to Copenhagen has been cancelled. He was issued a voucher to stay at the Embassy Suites Elizabeth and the voucher noted a value of 25$ for dinner and 15$ for breakfast.

Here is what he received for the dinner voucher: 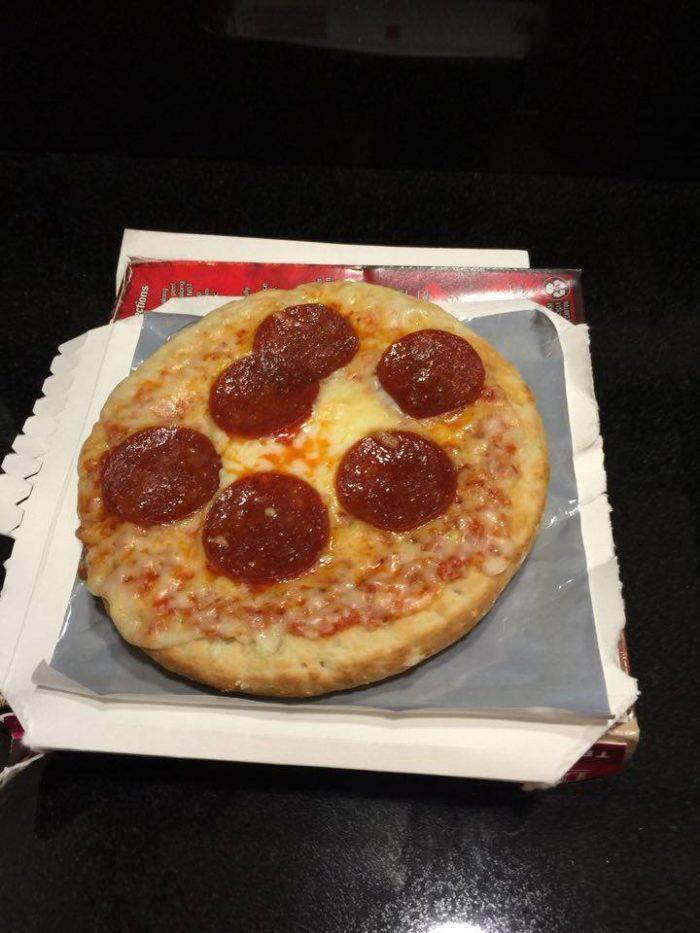 The pizza was roughly the size of a large hand and in no way reflects a value of 25$. In fact he could have probably gotten it for 2.99$ at a nearby gas station (if there was one around). A complaint to the front desk manager did not result in any improvement.

I suggested the reader who is a Hilton HHonors Gold member to write a complaint email to Hilton Customer Service and open an official complaint file against the hotel. He did so and included the picture of the pizza as well.

I would like to express my sincere apologies for falling short of our commitment to extend a rewarding experience due to the awful pizza during your stay. In an effort to make amends for your experience, a total of 40,000 points have been posted to your Hilton HHonors account. The Voice of our Customers is critical to ensuring our guests receive a rewarding experience when staying at the Hilton Portfolio of Brands. Thank you for bringing this concern to our attention.

40,000 HHonors points is the equivalent of a free night at the property which is a fair compensation considering the hotels money grubbing mentality and lack of customer service. Such treatment shouldn’t be the standard at a hotel such as Embassy Suites which is a full service brand of the Hilton portfolio. It would maybe have been acceptable for a Hilton Garden Inn which has limited service and a small kiosk area. At least then the customer could have at the minimum consumed two pizza for the voucher value given.

Some hotels are not providing fair value for such vouchers, forcing the guest to pay substantially on top in order to get a decent meal. Especially U.S. airlines usually provide lower valued vouchers which cover just a fraction of the meal. The reader was booked on a European carrier in this case who are usually better in providing adequate accommodation.

One advantage is, that the vouchers of U.S. carriers can usually be used at the food courts and airport outlets as well which was not the case in this instance as the hotel voucher and dinner voucher were combined into one and the customer was therefore forced to consume his meal at the hotel which is of course priced at a premium in the first place. To offer something such as this pizza for a 25$ voucher is nothing but a scam, both towards the airline and the customer.