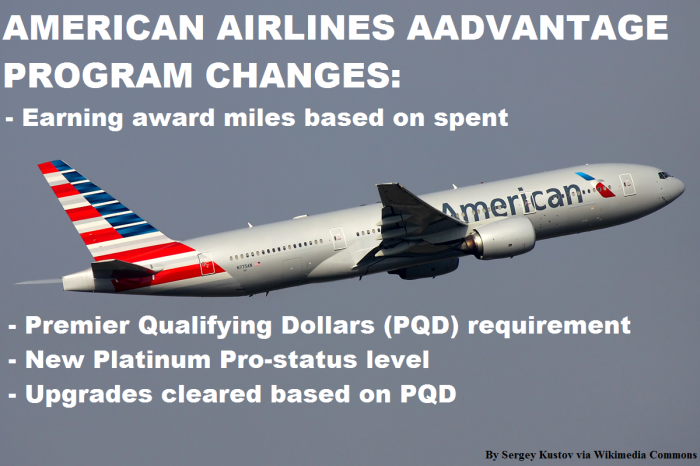 Among the changes AAdvantage members will now earn award miles based on the spend, members will be required to hit certain Elite Qualifying Dollars (EQD) thresholds in addition to the elite qualifying miles/segments, the introduction of a Platinum Pro-status level at a 75,000 elite qualifying miles level and soon upgrades will be prioritized within the elite level based on the EQD over the previous 12 months.

You can access American Airlines web page for these changes here.

Award Miles Based On Spend

Award miles are calculated based on the ticket price including carrier surcharges but excluding government imposed taxes and fees.

Award miles on Oneworld airlines and Alaska are calculated using a yet to be announced table that takes into account the flight distance and fare class.

American Airlines will calculate the EQD on Alaska and Oneworld airlines based on the flight distance and fare class.

American Airlines will introduce a Platinum Pro-status level starting January 2017 (only flights after January 1 will count towards this status). The status comes with unlimited upgrades for flights within North America and U.S. Central America. The Oneworld status maps to Sapphire (same as AA Platinum).

American Airlines has tinkered the upgrade clearance for new Platinum Pro members (the previous Platinum window). Executive Platinum members are eligible for complimentary award ticket upgrades. The EQD will be taken into consideration within status level starting in 2017 to process upgrades.

American Airlines here copies what Delta first introduced and United later also implemented. Isn’t it interesting that these EQD requirements and award miles earned based on the spend are almost exactly the same for all these airlines? Somewhat might call it a collusion.

This change means that people will earn a lot less award miles for competitively priced long-haul flights. Those that fly on expensive business class tickets and pricey short-haul ones are winners. They will earn more under this new scheme.

The EQD requirement won’t really hurt business travelers or leisure travelers that sometimes splurge for premium cabin tickets. It does hurt those that are required to always buy the cheapest fare or can plan well in advance.

Is airline loyalty dead? Well. With all these program changes over the past few years, everyone should ask themselves if they are getting more in return than what the loyalty costs for them (in form of higher ticket prices and inconvenient flight times/routings).