It’s Ramadan again and during the holy month it has been common that airlines of Muslim nations (especially the ME3 carriers) restrict the serving of alcohol for the entire month. 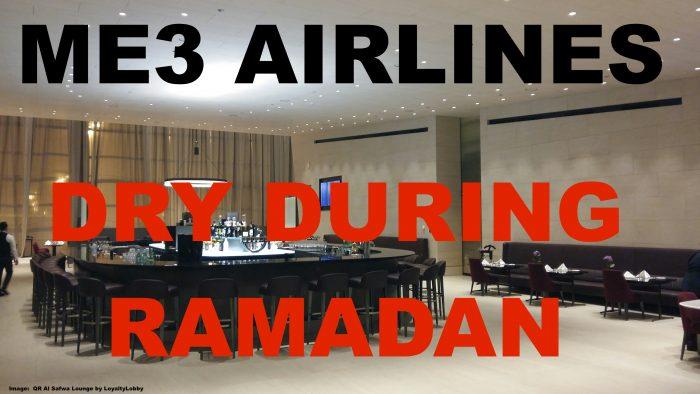 While previously alcohol continued to be served on board (except on the Middle East/North Africa routes) some airlines restrict the consumption of alcohol within the airport entirely.

Usually there are some advance announcements in the media but this year I couldn’t find any news article or website announcement regarding the airlines policy yet.

We have reached out to the ME3 Airlines Etihad, Emirates and Qatar Airways via Twitter/Email and so far only Etihad has replied to us what their policy will be during the coming month: 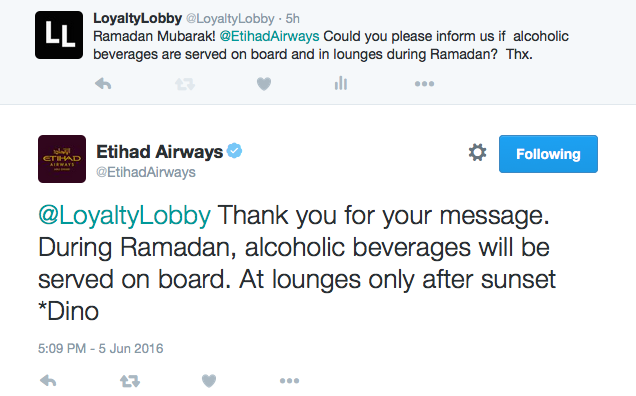 In regards to their policies we can so far repeat their information from last year (see here) and update accordingly should the carriers notify us with different information.

Etihad will continue serving alcohol in its international lounges including in Sydney, London and Paris, but this “will not be displayed in the bar area in the usual manner during daylight fasting hours”, an Etihad spokesperson told Australian Business Traveller.

However, the airline’s lounges at its Abu Dhabi hub will not serve alcohol during daylight fasting times “out of respect for local customs,” with the lounge’s bars open only from 7pm to 3am daily until Ramadan concludes.

A spokesperson for Qantas partner Emirates told Australian Business Traveller that “Emirates will continue to offer alcohol in all lounges and on flights during Ramadan.”

The airline which has been most restrictive in this regard is Qatar Airways. None of their lounges at Doha’s Hamad International Airport will serve any alcohol, not even on request.

Alcohol will still be served on flights during Ramadan – including from Doha to Australia and Europe, and in the airline’s London Heathrow lounge.

However, a Qatar Airways spokesperson advised that “in respect of the Holy month of Ramadan, alcohol will not be served in (Doha’s) Hamad International Airport during Ramadan.” This means that, in effect, Qatar lounges at Doha will be an around-the-clock ‘dry zone’ until Ramadan’s end in July.

Qatar is famous for their premium champagnes and other alcoholic beverages so if you are booked on QR during the next month I suggest you make use of the bar/selection on board because the lounge will be dry.

I don’t like the fact that the airlines are not stating their policy publicly on their website considering the vast majority of the ME3 customers are only connecting through their hubs and are likely not fasting during that time.

There are obviously many other airlines of Muslim countries and if you’re concerned about their beverage policy I suggest you contact their reservation offices for advance information.