A small explosion was reported on Sunday afternoon which occurred at the check-in area of Terminal 2 at Shangai Pudong International Airport.

Three people were reportedly injured and have been rushed to local hospitals in Shanghai while the incident is being investigated.

First results are that the detonation was caused by home made explosives inside two separate pieces baggage in the Terminal 2 check-in area, C Section. The two baggage items exploded subsequently within a matter of seconds.

Considering that these were two separate explosions and that two people were severely injured it sounds like a bit more than firecrackers.

A traveler who was inside the terminal short after the explosions tweeted images to Xinhua showing a man being taken to the hospital: 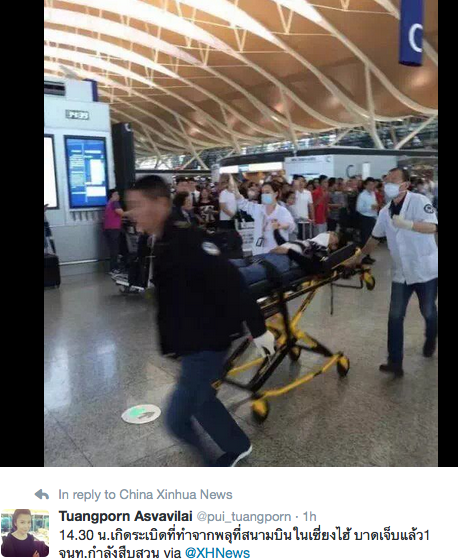 Meanwhile airport operations appear not to be effected by the incident and flight arrive/depart as usual. Pudong’s Terminal 2 also remains open and operational.

At least three people have been injured in an explosion at Shanghai’s Pudong International Airport, according to official reports.

Meanwile a video was uploaded on Youtube showing Army soldiers entering the terminal:

If they keep the operations running under these circumstances that would be very impressive.

Pending investigation it’s hard to say anything about what really happened here. It seems that the Chinese Authorities reacted quickly in caring for the injured and securing the terminal. Let’s hope the three victims of the explosion recover soon.

Marriott commented on a recent call or news release that brand standards that properties are required to adhere, and could be fined if not,...

Qatar Airways Running Out Of Cash