Passengers on a WestJet flight from Toronto to Vancouver were met by police upon arrival after the crew requested security due to the customers taking pictures on board. 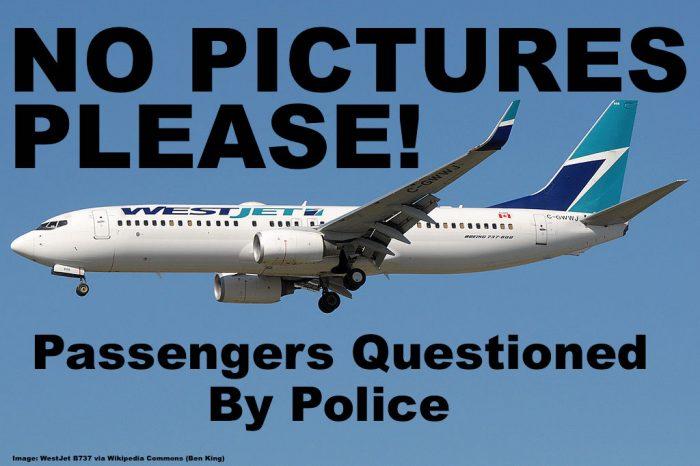 The passengers did not speak English or French and were interviewed by the police with the help of translators.

Apparently the crew found it suspicious that the vacationers took too many pictures on board and deemed it appropriate to notify security forces in Vancouver ahead of their arrival.

The Vancouver Sun (see here) wrote about it this morning.

According to a Transport Canada report, the WestJet crew witnessed “a few passengers on board who were taking pictures of everything. They felt it was suspicious so they asked to have police meet the flight upon arrival.”

With a translator’s help, police interviewed a “multitude of passengers” who “spoke a different language” not English or French, the report reads. Officers determined “they were simply taking pictures as they were on vacation and were unaware they should have asked the crew if it was okay.

“They apologized and deleted all pictures of the crew.”

Is it really that unusual that people take pictures on the plane? Unless the customers in question took full front pictures of the crew I really don’t get what their problem is. Even though many airlines have it buried in their conditions of carriage that photography on board is not permitted.

WestJet spokesman Robert Palmer said Friday he was unaware of the incident but noted that the Transport Canada report is preliminary and unconfirmed.

He also noted that “anything that takes place on a flight that is deemed to be noteworthy is communicated out in the form of a dispatch or bulletin to us. This wasn’t.

“That said, if this account is to be taken as accurate, it certainly sounds as if it was all a misunderstanding and was resolved.”

Go figure. But in doubt always call the police.

Instead of talking to the passengers directly, even if they don’t speak the language – for sure they would have understood that photography is prohibited – the crews first course of action was to call the police. That’s a great way of customer relations. Not.