Passengers who have future travel oneWorld carriers and their routing involves two separate reservations will find themselves unable to check through their baggage under newly established regulations.

In addition to that the airlines will also no longer provide protection for passengers on separate ticket in case of delays or other travel interruptions no matter if cause by the carrier or not.

So far airlines have mostly relied on interline agreements and telling a check-in agent you are continuing on another airline was sufficient to have your bag checked all the way as long as there was an agreement between the two carriers.

oneWorld has now discontinued this practice. Now you require a single reservation (PNR) for all of your flight segments in order to pick up your bags at the final destination.

With effect from 01 Jun 2016, all oneworld carriers have agreed that through* check-in will apply
ONLY to passengers travelling on an oneworld itinerary ticketed on a single ticket or where segments are ticketed separately but in the same PNR record.

*=Through services are defined as the customer and their baggage being through checked to their final destinations.

To align with the change, disruption policy will also be revised to exclude protection for passengers holding separate tickets that is not booked under the same PNR.

This means if you travel on two separate reservations (PNR), for example Bangkok to Hong Kong on Cathay plus Hong Kong to London on British Airways and the first segment will be delayed to the point of you missing the connection on the second reservation, the airline is not required and will in fact not re-book you free of charge to another flight.

It would however be ok if these two different PNR are both Cathay Pacific or Dragonair flights.

Cathay summarized this in a chart that needs to be read thoroughly to get the dimension of the new rules. 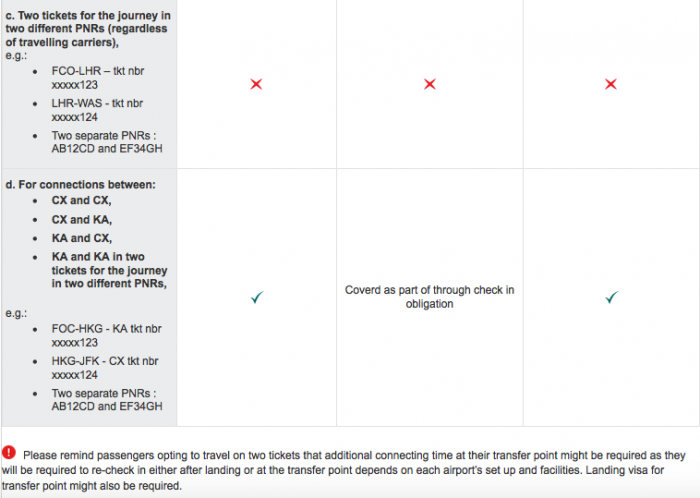 The chart specifically points out that passengers effected by this will have to clear immigration in order to pick up their baggage and proceed to the departure hall in order to check in for the second flight. For certain passport holders this might require a Visa.

This definitely stretches the total connection time required to at least 2.5-3 hours (always allow at least 1h for baggage delivery, you never know!) plus whatever buffer you want to give yourself for potential delays. Usually a connection would be possible within just 60-90 minutes at most airports, even if you have to go to the transfer desk in order to get your connection boarding pass and have your baggage tag number entered.

Why do people travel on different reservations and how can this become complicated?

Often we try to redeem award tickets but one short sector isn’t available on miles. Not a big deal, usually you can find a relatively low priced ticket for that first sector even on mainline airlines such as Cathay Pacific if we want to remain with the above referenced example. If this 150$ investment means you’re able to then book the award you want sure why not. Especially because fuel surcharges ex HK are severely limited and the savings would probably be greater than the ticket cost for the extra segment.

The downside of it all is the time it requires to get your connection. As long as you check baggage that is.

Reason for these changes must be the liability for both damages in baggage and delays of passengers, causing expenses for the airlines who then have to sort it out between each other who has to pay for it.

So far oneWorld is the only alliance who came up with such a strict rule. I wouldn’t exclude Star Alliance or SkyTeam from following suit and also limit their customer friendly interline policy. In the past I have used this feature a few times and it was never a problem. I don’t check-in baggage that often though.

Have you experienced problems with baggage interlining on airlines? Tell us about it!