CBC run a story today about an unfortunate situation that happens quite often. Airline issues the ticket but requires the credit card used to pay shown at the airport before passenger is allowed to check in. 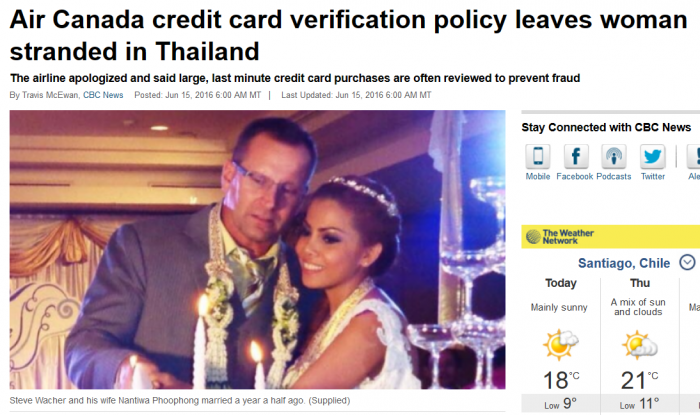 Canadian husband found this out when he bought a ticket on Air Canada’s website to get his Thai wife to join him on family farm.

You can access the entire CBC piece here of which below is an excerpt:

Air Canada has apologized to an Alberta man after his wife was barred from an overseas flight due to a credit card verification issue.

On Monday, while on vacation at his parent’s farm near Sylvan Lake, Steve Wacher booked a last-minute flight through Air Canada so his wife in Thailand could join him.

His wife, Nantiwa Phoophong, arrived two and half hours prior to the flight’s departure at Bangkok’s Suvarnabhumi Airport. At the desk of Air Canada’s partner company, All Nippon Airways, she was told the credit card used to book the flight needed to be verified.

Because the flight was paid for with Wacher’s card, she was told that her husband needed to verify the card with Air Canada before she could board the plane.

You should never use airlines’ websites to purchase ticket for others (or even for yourself). The flier may be asked to show the credit card to purchase the ticket at the airport before boarding pass is issued.

Even, if you purchase a ticket for yourself, you may be asked to show the credit card. Considering how often cards are cloned and replaced by the credit card companies there is always a chance you no longer even carry the card.

The solution is to use OTA’s such as Expedia to issue the ticket. There is no requirement on agent issued tickets that the credit card used to pay has be shown at the airport.

Over the years, I have probably purchased tickets using cards issued in five or more countries to purchase tickets to more than 20 people using Expedias and never had an issue. I don’t have time to waste with this credit card verification nonsense.

Airlines would like us to purchase tickets on their terrible websites that don’t show all the options and put up with this payment “verification”. If airline doesn’t like the credit card used, then they simply should not issue the ticket.