Singapore Airlines has announced a new non-stop service from Singapore to San Francisco using their brand new Airbus A350-900 aircraft as well as a second daily Los Angeles flight via Seoul-Incheon. 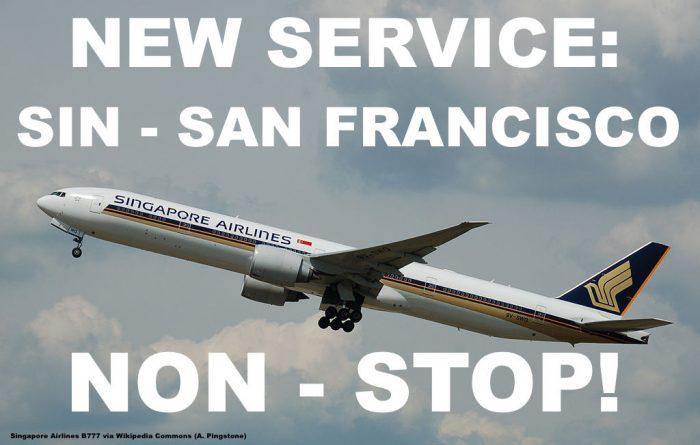 The flight via Seoul was previously serving SFO and has now been rescheduled to a second Los Angeles Service as alternative to the A380 connection via Tokyo-Narita.

Back in January United Airlines announced their own nonstop service from San Francisco to Singapore going into direct competition with Singapore Airlines (we wrote about it here). The service started two weeks ago and got off to a rocky start. Just this week the service has been cancelled twice already. A friend of mine was supposed to travel on the nonstop and had to fly via Hong Kong instead.

Someone at Singapore Airlines must have thought ‘Don’t mess with us’ and to give United a nice welcome present announced their own non stop to San Francisco, starting 23 October 2016.

Singapore Airlines started to tease their customers a little bit with mysterious announcements and suggestive twitter posts which I found hilarious: 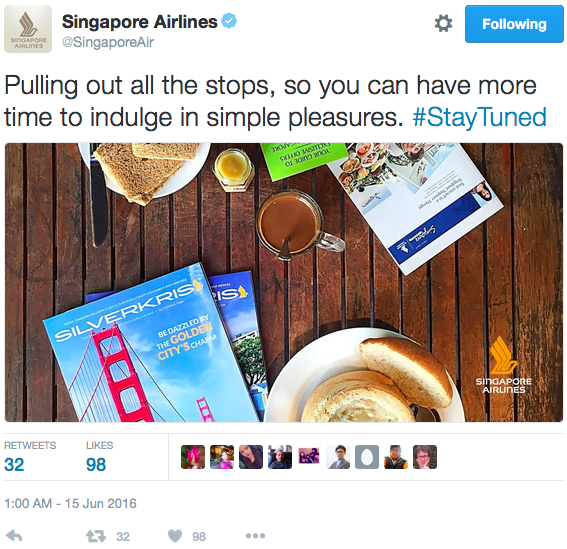 Yesterday it was time to solve the puzzle and SIA issued their press release (see here).

Singapore Airlines (SIA) is to launch non-stop flights between Singapore and San Francisco and will add a second daily service to Los Angeles in an expansion of its US operations.

The non-stop Singapore-San Francisco flights will be operated on a daily basis with effect from 23 October 2016 using Airbus A350-900 aircraft.

Flying time for the new Singapore-San Francisco services will be between 14:35hrs and 17:45hrs depending on direction and time of year, over a journey of around 13,600km. They will be the longest flights in SIA’s network until 2018, when a new variant of the A350-900 will enter service, enabling even longer flights between Singapore and both Los Angeles and New York. SIA is the launch customer for the new variant, the A350-900ULR, with seven of the type on order.

I took the SIA nonstop flights to/from Los Angeles and Newark many times while it was still around and that is a marathon route. I liked the convenience though and can’t wait until the A350-900ULR will be delivered to go back on this route.

The Los Angeles to Seoul routing is very useful as well as right now the only options for this route are Asiana and Korean Air. While both airlines are not bad at all I still prefer flying Singapore Airlines when possible and collect Solitaire value.

Flying the A350-900 should be a very nice experience in Business Class even though the flight will still be pretty long.The flight is configured with Business Class, Premium Economy and Economy Class.

The A350-900 is able to operate non-stop San Francisco flights on a year-round basis, although depending on headwinds there will be some payload restrictions which will result in some seats not being offered for sale. The aircraft is configured with 253 seats in Business Class, Premium Economy Class and Economy Class.

Is the timing convenient? I guess that’s up to you to decide. The flight times are loaded now:

In the same press release, SIA announced that they will discontinue their Sao Paulo service and no longer fly to Brazil for the time being.

SIA has at the same time taken the difficult decision to suspend services to Sao Paulo in Brazil as a result of the sustained weak performance of the route. SIA operates three weekly flights to Sao Paulo via Barcelona and the last flight will be operated on 20 October 2016. Services between Singapore and Barcelona will continue to be operated.

The flight to GRU is right now operated as Singapore – Barcelona – Sao Paulo. Based on the announcement just the add on to GRU will be discontinued. That’s a little unfortunate as starting a ticket in Brazil, especially KrisFlyer award tickets, completely eliminates fuel surcharges which are outlawed in per Brazilian law. At the same time, if you have active tickets ticketed or valid beyond beyond October 20th you might want to have a look at it to adjust your plans if necessary.

Is Singapore Airlines able to siphon off customers from United once the service begins? Yes and no. United operates this route with a 787 Dreamliner, a plane which I personally hate, while SIA will use their new A350. So apart from much superior service they also have a much superior plane.

As with anything else in life though, product quality isn’t all that influences the customers decision. Customers who fly United do so mostly for price, corporate contracts/travel policy, use of frequent flier miles and especially use of Global Upgrade Certificates which make a huge difference on such a long flight.

In the end United frequent fliers might be profiting from this if regular Business Class revenue passengers choose SQ for obvious reasons and free up a few seats in the premium cabin that might then be available for upgrades. As long as United keeps operating that route.