Beware if you’re traveling to Rio de Janeiro for the Olympics or anytime soon, especially if you’re an American tourist. A friend and LoyaltyLobby reader from the US wrote to tell me about his misfortune on a recent trip there. 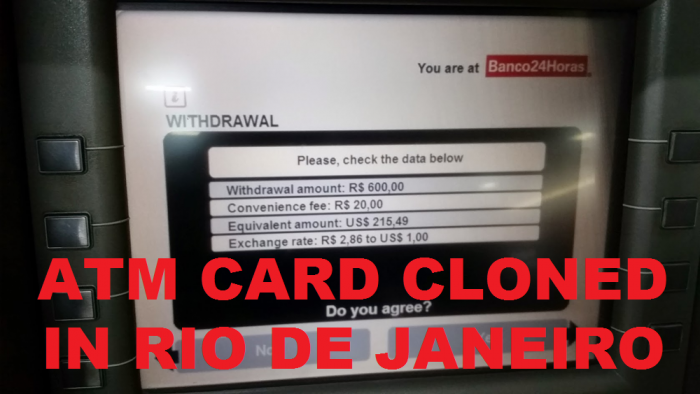 As a first time traveler to Brazil, when he landed at Galeão International Airport, he wanted to get cash to cover a taxi ride to his hotel on Copacabana Beach, one of the main tourist areas in Rio.

A short distance away from the arrivals area in the airport, there is a row of about 8-10 ATMs from different banks (both Brazilian and foreign) sitting against the back wall (note that the photo above is from my personal trip some time ago as you can see from the exchange rate).

The reader decided to use an HSBC ATM due to the international familiarity of the brand, but after inserting his card and entering his PIN number, the machine displayed a message that his card was not compatible with that machine. Not thinking much of it, he went to one of the other machines and his transaction was approved. He took out money a couple more times over the next few days at a bank next to his hotel before returning home.

The day after returning home, he got a call from his bank alerting him to a potential fraudulent ATM withdrawal at another ATM machine in Rio in the amount of 800 Brazilian Reals (about $230 USD). After doing some online research, the reader discovered that ATM scams at the airport in Rio are actually quite common and have been going on for years.  It was likely the HSBC machine that refused his card initially was the culprit.

Basically the reasons cited for this scam continuing for so long are:

(1) the incompetence of the Brazilian civil police force

(2) targeting of ATM cards without EMV chips (mostly US cards)

(3) the fact that most tourists are already back home when the fraudulent activity begins, so many of these scams are not reported to the Brazilian authorities.

What can you do to avoid falling victim to these scams?

2) If you can’t get foreign currency before your trip, many taxis around the world may still accept common international currency such as US dollars or Euros.

3) A good number of taxi companies in major cities around the world also accept credit cards, and many credit cards, especially those from the US, don’t carry foreign transaction fees.

4) On the ATM machine itself, look for anything that seems out of place… a card reader slot that doesn’t sit flush with the rest of the machine or is loose, or maybe a part of the machine that’s a slightly different color.

This reminds me of my personal misfortune of having two credit cards cloned while in Brazil last year (read more here). Both of these were chip cards but you could use them for swipe transactions too.

I have been to Brazil already a few times after that incident and so far no further cloning has happened (or at least I have not noticed).

You have to be careful with the ATMs in Rio and other cities in Brazil. It is probably the best course of action to use an ATM that is inside a bank.