A Singapore Airlines Boeing 777, flight SQ368 en route to Milan was forced to return to Singapore Changi Airport last night after the pilots informed the passengers about a fuel leak. 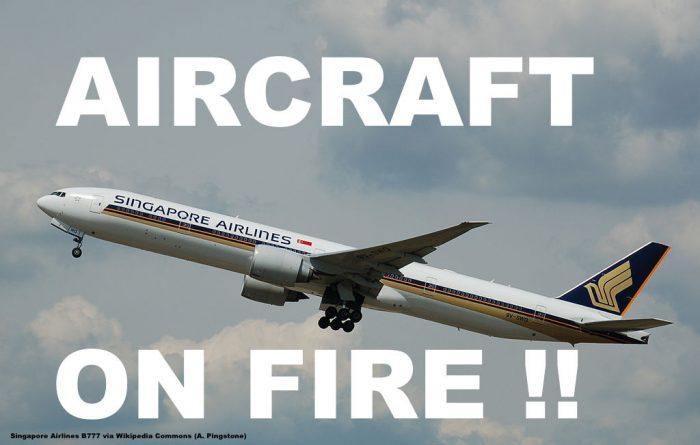 Upon landing on runway number two the passengers relief didn’t last very long as short after the aircraft’s right wing caught fire and emergency service had to extinguish the blaze without any injuries reported.

Passengers were then evacuated over stairs which apparently went orderly as well and neither passengers or crew were harmed in any way during this incident.

The story was reported in the Straits Times (access here) and other media outlets this morning.

A Singapore Airlines (SIA) plane forced to return to Singapore due to an engine fault caught fire shortly after it landed at Changi Airport on Monday (June 27) morning.

There were no injuries but travellers booked on other early morning flights faced some delays as Runway 2 where the plane landed remains closed.

Flight SQ368 with 222 passengers and 19 crew on board, departed Changi Airport Terminal 3 for Milan, Italy, at around 2.05am on Monday. About three hours into the flight, the Boeing 777-300ER aircraft was forced to turn back after the pilot received an engine oil warning message.

One of the plane’s passengers, Ms Lee Bee Yee, 43, said she detected a faint whiff of what smelled like gasoline about two or three hours into the flight. “We were informed by the pilot that there was a leak, and that the plane would have to return to Changi Airport as it did not have enough fuel for the journey,” said Ms Lee.

According to Ms Lee, the plane touched down safely at Changi Airport at around 6.45am to cheers and clapping from the passengers. Shortly after the landing, however, the plane’s right wing caught fire.

“The blaze was quite fierce and we waited for around two to three minutes before the fire engines arrived,” she said.

The passengers were very very lucky that this situation ended as it did. There were numerous accidents in the past where fire on the aircraft, even the outside, lead to the cabin being engulfed in toxic fumes and passengers died from the smoke or subsequent fires.

Below is a video uploaded on Youtube showing the fire:

In 2000, Singapore Airlines flight SQ6 collided with construction equipment after taking off from a wrong runway at Taipei Airport. The fully fueled aircraft caught fire, killing 83 of the 179 passengers on board after the fuel tanks exploded.

Another video shows the aircraft in daylight and visible effects the fire had.

It’s hasn’t been reported yet how much fuel was left in the tanks but even though the passengers said that it took less than 10 minutes to extinguish the fire, that’s an eternity during which anything can happen.

SIA said the right engine of the plane caught fire after the plane landed at Changi airport at 6.50am, with airport emergency services responding quickly to the fire. Passengers then disembarked through stairs and were transported to the terminal building by bus.

The Straits Times understands that SIA made arrangements for a new aircraft and set of crew. The new flight to Milan departed at 9.30am on Monday.

In a notice handed out to all passengers, SIA apologised for the incident and said arrangements had been made for light refreshments while passengers wait for their flight.

Not sure how motivated or capable I would have been to immediately board another flight after this to be honest.

The investigation will at some point reveal the reason of the fuel leak as well as how the fire started. It’s common that the local authorities cooperate with the American NTSB since it was a U.S. manufactured aircraft, experts of the Boeing Company and the Engine manufacturer will also contribute. Glad that everybody got out of this alive and without injury.