Hilton sold Waldorf Astoria New York back in 2014 for Anbang (the Chinese insurer that tried to acquire Starwood) and received close to $2B in the process. 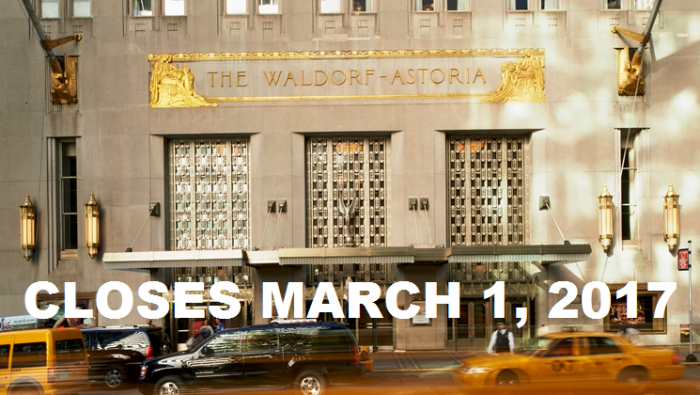 The hotel will be closed on March 1 next year for three years while most of the current 1,413 rooms will be turned to condos. The hotel will reopen with 300 to 500 rooms.

Here’s an excerpt what WSJ reported over the weekend (access the entire piece here):

The Chinese acquirer of the Waldorf Astoria is finalizing plans for an extensive overhaul that would shut the landmark New York hotel for up to three years and convert as many as three-quarters of its rooms into private apartments, people familiar with the matter said.

Anbang Insurance Group Co.’s restoration plan calls for closing down the 1,413-room property in the spring, removing as many as 1,100 hotel rooms and eliminating hundreds of hotel jobs, the people said.

When the Waldorf reopens, the hotel will feature between 300 and 500 guest rooms upgraded to luxury standards, the people said. The remaining units will be sold as condominiums.

The vast reduction in Waldorf hotel rooms will lead to the elimination of many room-service, housekeeping and other hospitality jobs. The Waldorf has about 1,500 hotel employees. The new owners and Hilton Worldwide Holdings Inc., which will continue to manage the property when it reopens, have reached severance agreements with hundreds of these workers at a cost of $100 million or more, some of the people familiar with the matter said.

Here’s the availability for the hotel on Hilton’s website:

Let’s see if the Anbang made a good purchase two years ago when it paid the record amount for the hotel or if Hilton sold it too cheap.

It is interesting that it is worthwhile still to convert hotels to condos in New York (anyone remember Park Hyatt Stanhope?) considering the often very high daily rates in the city.