The Economist run a story yesterday about the effects of the Brexit to air travel in Europe and beyond.

British people went to the polls on Thursday to decide if they wish to stay in the European Union or not. Those that wish to leave won by 4% margin (52% to 48%).

You can access The Economist piece here of which below is an excerpt:

DESPITE predicting that a Brexit vote would not “have a material impact on our business”, shares in International Airlines Group (IAG), the parent company of British Airways, have plummeted by one-third since Friday. Shares in easyJet, the London-based low-cost carrier that relies heavily on open skies across Europe, have crashed just as dramatically. Even airlines at the heart of the European project are suffering: Lufthansa, Germany’s flag-carrier, is worth 17% less than it was before the referendum (see chart). Traders seem convinced that Britain’s divorce from Europe is bad news for the entire industry, whether due to the gloomy economic outlook, currency volatility, resurgent travel restrictions or the prospect of a full-blown break-up of the European Union. 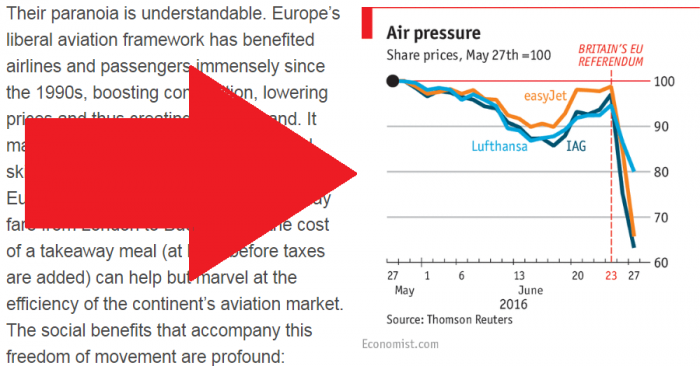 The International Air Transport Association (IATA), the industry’s main trade group, thinks British air-passenger numbers could fall by 3-5% by 2020. Its forecast assumes that British businesses will rein in corporate travel and British families will defer holidays as the economic storm clouds gather. The depreciation of the pound, which will make foreign travel more expensive, will compound the damage. (A corresponding rise in visitors to bargain Britain is unlikely to offset the shortfall; Britons currently account for about two-thirds of traffic at domestic airports.)

IAG owns four airlines (British Airways, Iberia, Vueling and Aer Lingus). Only British Airways will potentially be outside of the EU within few years time. The remaining three continue to operate as Community Carriers.

It is interesting to see if IAG decides to grow its Dublin and Madrid hubs now instead of putting most of its eggs trying to grow and get the third runway built at London’s Heathrow.

I have certainly benefited from the European Union and the Schengen area (Britain is not part of the latter). I love the fact that I have the right to live and work on any member state if I so wish.