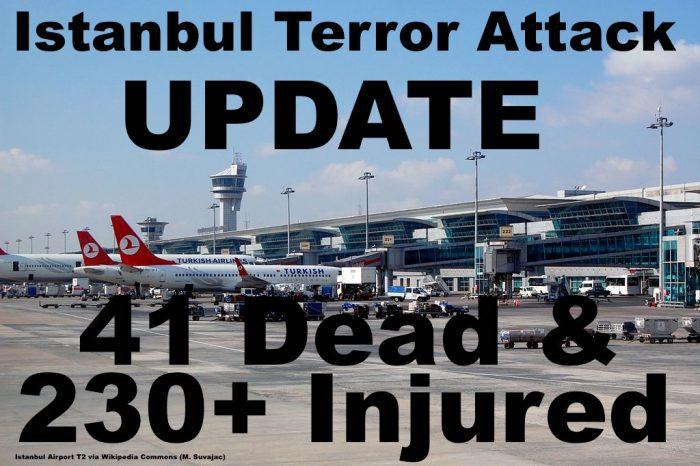 More than 230 people have been injured in the attacks many of which are still being treated at local hospitals.

Terrorists arrived by taxi at Istanbul airport yesterday and initiated gunfire into a group of people entering the terminal building. After police on scene returned fire at the assailants they detonated explosives and blew themselves up. John wrote about the incident yesterday (see here).

In the meanwhile BBC (access here) reports about the situation as it develops.

Three attackers arrived in a taxi and began firing at the terminal entrance late on Tuesday. They blew themselves up after police fired back.

PM Binali Yildirim said early signs pointed to so-called Islamic State but no-one has so far admitted the attack. Recent bombings have been linked to either IS or Kurdish separatists. Tuesday’s attack looked like a major co-ordinated assault, says the BBC’s Mark Lowen.

Istanbul’s governor confirmed 41 people had died and 239 were injured in the attack. At least 13 of those killed were of foreign or dual nationality. Some 109 of those hurt have now been discharged from hospital.

Reports of the attack vary but it appears the attackers opened fire at the entrance where the X-ray machines are positioned, sparking an exchange with police. At least two ran into the building.

Footage on social media shows one moving through the building as people around him flee. He is shot by police and remains on the ground for about 20 seconds before blowing himself up. All three attackers were killed. …

Ataturk airport has long been seen as a vulnerable target, our Turkey correspondent adds, reporting from a plane stuck on the tarmac in Istanbul. There are X-ray scanners at the entrance to the terminal but security checks for cars are limited.

When I was at Istanbul Airport six weeks ago I briefly left the terminal building with my carry on and went back inside a few minutes after. I had to put my bag through an X-Ray machine as described but nobody was watching the monitor

… All the signs point towards IS being the culprits. This is what British counter-terrorism officials term “a marauding terrorist firearms attack”, following a pattern first seen in the Mumbai attacks of 2008.

The Istanbul targets were international air travellers and ground staff at an iconic location, the third busiest airport in Europe.

IS is targeting Turkey because it sees its government as being un-Islamic and too close to its Western allies in Nato. IS is also feeling the pressure as the Turkish authorities move to close down its networks inside Turkey.

Flights in and out of the airport were suspended after the attack. They have now resumed, but information boards showed about one-third had been cancelled, with many delays.

Istanbul has experienced multiple terror attacks in recent history and this is starting to have a severe effect on tourism in the country which used to be very popular with travelers from all over the world. People now start to be careful and with a reason. Personally I also won’t be flying Turkish Airlines anymore for the time being as the chance of the carrier becoming a political target is too high a risk as I’m willing to take.

Here are some Turkey travel advisories to consider:

Australia suggests to exercise a ‘High Degree of Caution’ as ‘Terrorist attacks can occur anywhere at any time in Turkey.’

If you plan on traveling to Turkey or have second thoughts about your plans my suggestion is to monitor the media closely. Should you wish to cancel your trip you might want to contact your tour operator/airline/hotel to see if they have specific travel waivers in place or might offer a free change/cancellation on an ad hoc basis.

The temporary closure of Istanbul Airport might have had an effect of flight schedules due to crew availability and aircraft rescheduling. Passengers inbound or outbound of Istanbul should check with their airline for flight updates.